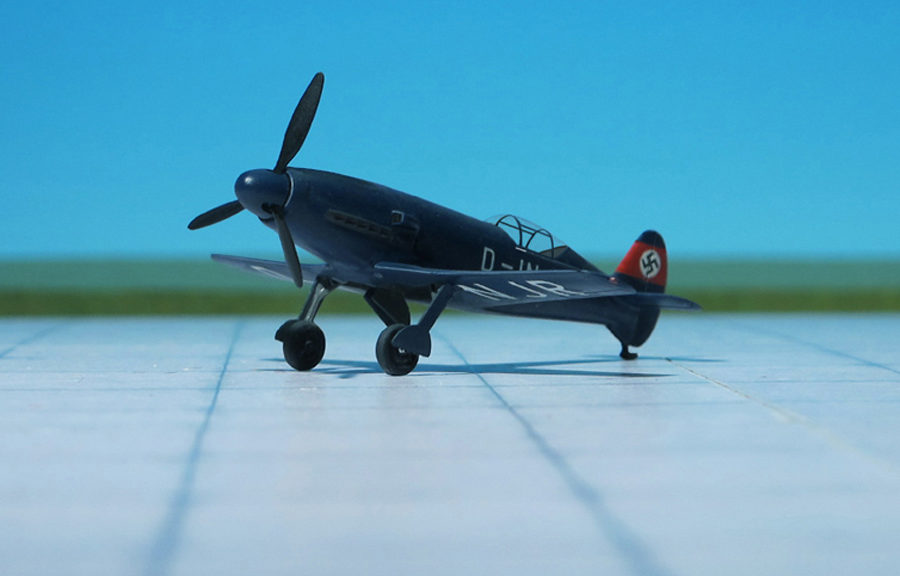 COMMENT: The Messerschmitt Me 209 V1 was a single-engine racing aircraft which was designed for and succeeded at breaking speed records.
The designation Me 209 was used for two separate projects during World War II. The first was a record-setting, single-engined race aircraft, for which little or no consideration was given to adaptation for combat. The second Me 209  V4 was a proposal for a follow-up to the highly successful Messerschmitt Bf 109 which served as the Luftwaffe’s primary fighter throughout World War II.
Designed in 1937, the Me 209 V1 was a completely separate aircraft from the Messerschmitt Bf 109, solely designed to break speed records. It shared only its Daimler-Benz DB 601 engine with the Bf 109, which in the Me 209 was equipped with steam cooling. Willy Messerschmitt designed the small aircraft with a cockpit placed far back along the fuselage just in front of its unique cross-shaped tail section. Unlike the Bf 109, the Me 209 featured a wide track, inwardly-retracting undercarriage mounted in the wing section.
The aircraft achieved its purpose when test pilot Fritz Wendel flew it to a new world speed record of almost 469 mph on 26 April 1939, bearing the German civil registration D-INJR. This record was not officially broken by another piston-engined aircraft until 16 August 1969 by Darry Greenamyer’s highly modified Conquest F8F “Bearcat”.
The Me 209 V1’s speed record was itself shattered in terms of absolute speed, eighteen months later by Heini Dittmar, flying another Messerschmitt aircraft design, the Messerschmitt Me 163A V4 rocket fighter prototype to a 624 mph record in October 1941.
The idea of adapting the Messerschmitt Me 209 racer to the fighter role gained momentum when, during the Battle of Britain, the Messerschmitt Bf (Me)109 failed to gain superiority over the Royal Air Force’s Supermarine “Spitfire”. The little record-setter, however, was not up to the task of air combat. Its wings were almost completely occupied by the engine’s liquid cooling system and therefore prohibited conventional installation of armament. The aircraft also proved difficult to fly and extremely hard to control on the ground. Nevertheless, the Messerschmitt team made several attempts to improve the aircraft’s performance by giving it longer wings, a taller vertical stabilizer, and installing two synchronized 7.92 mm MG 17 in the engine cowling. Several modifications on the aircraft, designated Messerschmitt Me 209 V4, however, added so much weight that the aircraft ended up slower than the contemporary Bf 109E. As a result the complete Messerschmitt Me 209 project was soon cancelled, but was revived later in form of the Messerschmitt Me 209 V5. (Ref.: 24).