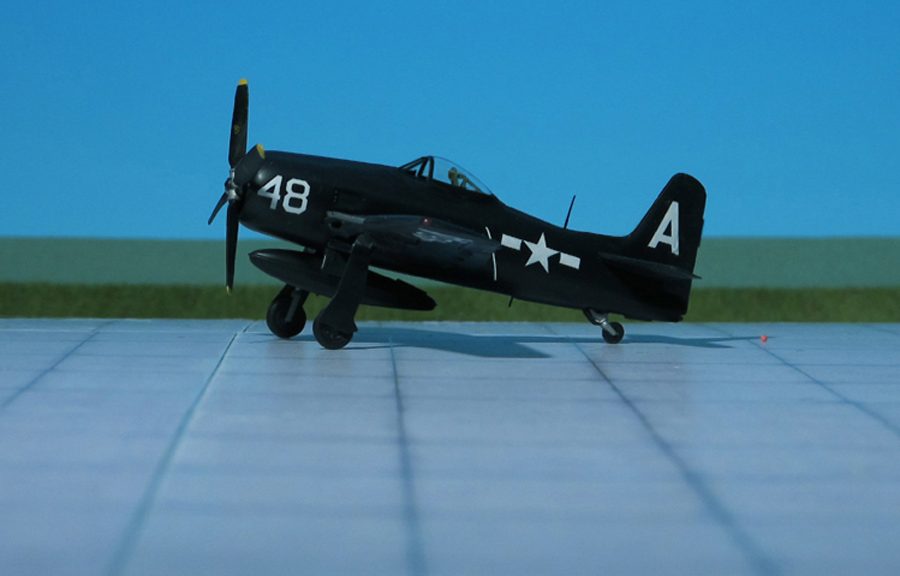 COMMENT: The Grumman F8F “Bearcat” concept began during a meeting between Battle of Midway veteran Grumman F4F “Wildcat” pilots and Grumman authorities on June 1942. At the meeting, Lieutenant Commander J. Thatch emphasized one of the most important requirements in a good fighter plane was “climb rate”.
Climb performance is strongly related to the power-to weight ratio, and is maximized by wrapping the smallest and lightest possible airframe around the most powerful available engine. Another goal was that the new fighter ­– Grumman’s design designation for the aircraft was G-58 – should be able to operate from escort carries, which were then limited to the obsolescent F4F “Wildcat” as the Grumman F6F “Hellcat” was too large and heavy. A small, lightweight aircraft would make this possible. After intensively analyzing carrier warfare in the Pacific Theatre of Operation for a year and a half, Grumman began development of the G-58 “Bearcat” in late 1943.
In 1943, Grumman was in the process of introducing the F6F Hellcat, powered by the Pratt & Whitney R-2800 engine which provided 2,000 horsepower. The R-2800 was the most powerful American engine available at that time, so it would be retained for the G-58. This meant that improved performance would have to come from a lighter airframe.
To meet this goal, the Bearcat’s fuselage was about 1.5 m shorter than the Hellcat, and was cut down vertically behind the cockpit area. This allowed the use of a bubble canopy, the first to be fit to a US Navy fighter. The vertical stabilizer was the same height as the Hellcat’s, but increased aspect ratio, giving it a thinner look. Similarly, the main wing had the same span, but having lower thickness, especially at the root. Structurally the fuselage was strengthened and armor protection was provided for the pilot, engine and oil cooler. Compared to the “Hellcat”, the “Bearcat” was 20% lighter, had a 30% better rate of climb and was 50 mph (80 km/h) faster.
The Navy placed a production contract for 2,023 aircraft based on the second prototype on 6 October 1944. On February 1945 they awarded another contract for 1,876 slightly modified aircraft from General Motors, given the designation F3M-1. These differed primarily in having the R-2800-34W engine and a small increase in fuel capacity.
Deliveries from Grumman began on  May 1945. The end of the war led to the Grumman order being reduced to 770 examples, and the GM contract being cancelled outright. An additional order was placed for 126 F8F-1B’s replacing the .50 cal machine guns with the 20 mm M2 cannon, the US version of the widely used Hispano-Suiza HS.404. The F8F prototypes were ordered in November 1943 and first flew on 21 August 1944, a mere nine months later. The first production aircraft was delivered in February 1945 and the first squadron, VF-19, embarked to CV 16 “Lexington”, was operational by  May 1945, but WW II was over before the aircraft saw combat service (Ref.: 24).