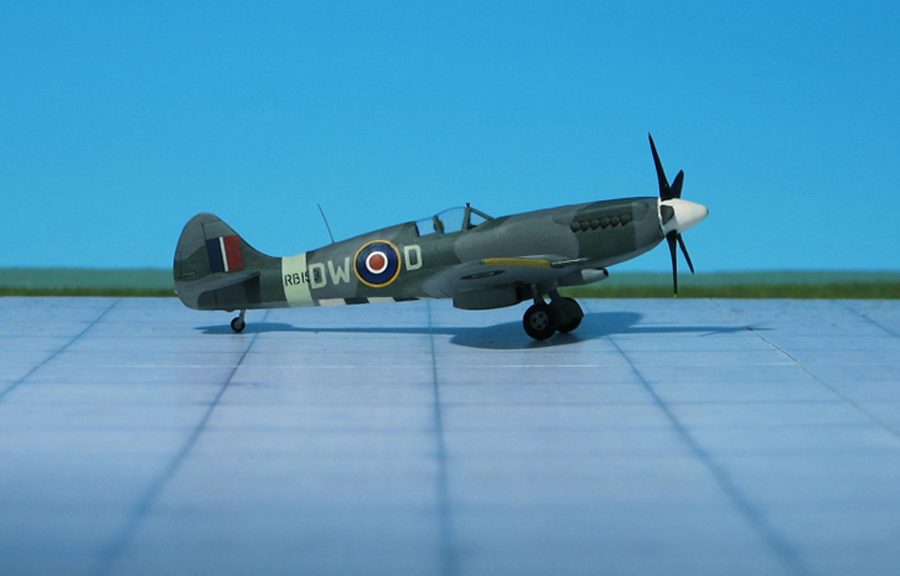 COMMENT: In order to boost the performance of the Spitfire Mk. IV it was intended to replace the Rolls-Royce Merlin engine by a single stage Rolls-Royce Griffon IIb liquid-cooled engine, driving a four-blade airscrew. In order to avoid confusion the Griffon engine prototype was redesigned as Spitfire Mk. XX. So in consequence all Griffon-powered Spitfires would be designated in the Mk. XX series, but this plan was not adhered to when the interim Griffon-powered Mk. XII, XIV, XVII and XIX were produced. The Spitfire Mk. IV alias Mk. XX was made the subject of production contracts during the period that the prototype was under development, and 750 were ordered in autumn 1941. But in fact, none was produced in this form. In spring 1942 the need arose suddenly for a high-performance low-altitude fighter to combat the low-flying Focke-Wulf Fw 190. The availability of the improved version of the two-stage Griffon engine led to an interim variant of the Spitfire, designated Mk. XIV. As initially produced, this aircraft had what was, apart from some strengthening of the fuselage, a standard Mk. VIII airframe married to a Griffon 65 engine which drove a five-blade Rotol airscrew. The vertical surfaces were enlarged and the “C” wing was used. In total 975 Spitfire Mk. XIV were produced, 527 fighter and 430 fighter-reconnaissance aircraft. The Spitfire Mk. XIV gained the distinction of destroying the first Messerschmitt Me 262 in fighter-versus-fighter combat, this event taking place on October 5, 1944 (Ref.: 12).