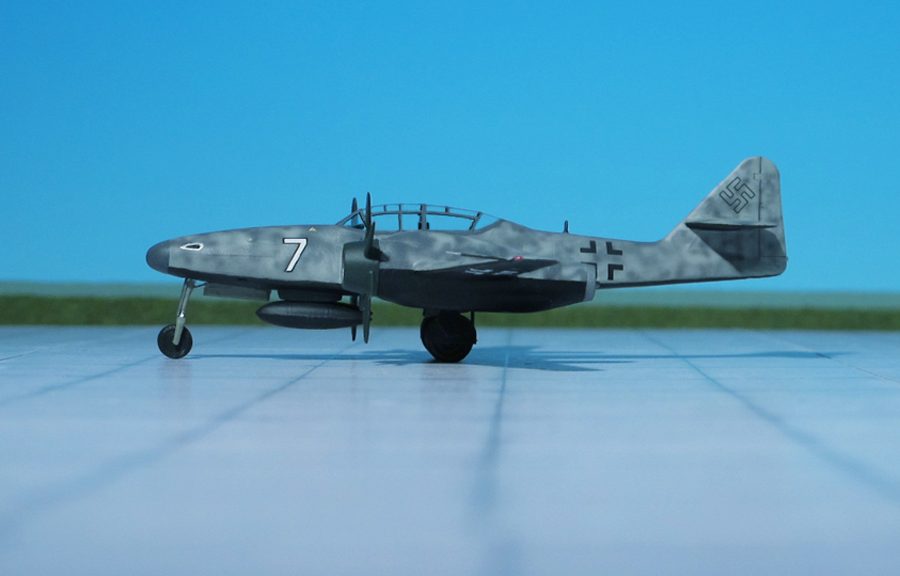 COMMENT: From the onset Messerschmitt engineers worked on several modification of the basic Me 262 ‘Schwalbe’ and ‘Sturmvogel’ designs, e. g. with different equipment, engines, electronics and weapon systems. Some of them were realized, others remained in project status. The availability of new and powerful turboprop engines was of great interest for long-range aircraft, especially for night- and all-weather fighters. The main advantage of this new power unit was the relative little fuel consumption, compared with the turbojet engines at that time, and by that an extended time of flight. Pioneers on that field were BMW (BMW 028, 5,440 hp), Daimler Benz (DB ZTL, 2,000 hp), Heinkel,( HeS 021, 3,300 hp), and Junkers (Jumo 022, 6,000 hp). None of these engines were completed and tested, but some in a very advanced stage.
This Messerschmitt Me 262B-2 design  dates back to early 1945. Based on an airframe of a two-seater Me 262B, two Heinkel-Hirth HeS 021 turboprops, each driving six-bladed propellers, should be installed. As with many other projects this design remained on the drawing board until the end of the hostilities. After the war similar designs were developed and flown in the UK, the Gloster ‘Trent Meteor”, and the US the Convair XP-81, and the Ryan F2R-1 ‘Dark Shadow’, respectively.