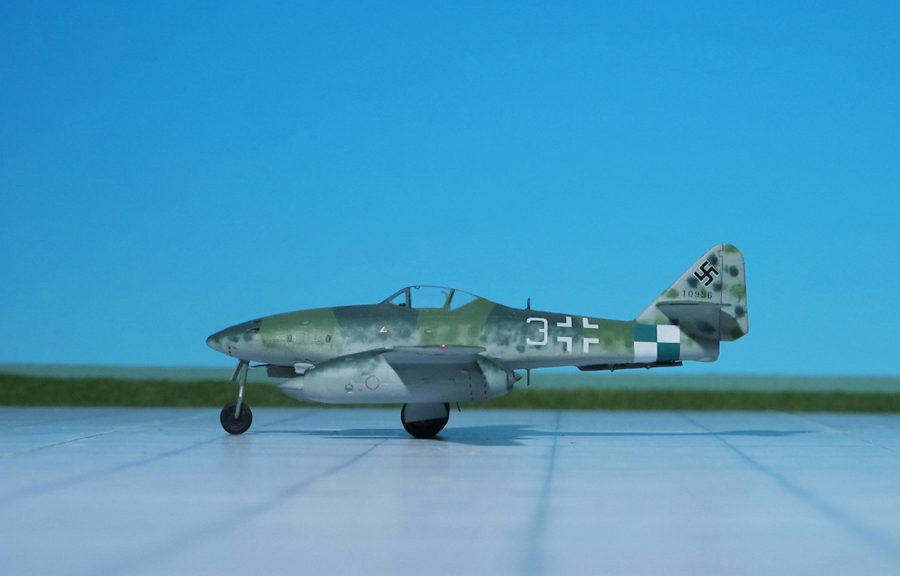 COMMENT: Early in 1945, considerable importance was attached to the rapid development of rocket-boosted ‘Heimatschützer’ (‘Home Protector’) versions of the Messerschmitt Me 262 capable of climbing to intercept altitude with extreme rapidity. The first of these, the Messerschmitt Me 262C-1a ‘Heimatschützer I’ converted from a Me 262A-1a, was flown for the first time on February 27, 1945. The Me 262C-1a had a Walter bi-fuel rocket motor mounted in the extreme rear of the fuselage. Tanks for the ‘T-Stoff’ and ‘C-Stoff’ for the rocket engine and the fuel tanks for the turbojet engines were located in the fuselage. Although the rocket motor did reduce the take-off run of the Me 262C-1a, its primary function was to boost climb rate. Once started the rocket motor provided full power for three minutes which was sufficient to push the Me 262C-1a to an altitude of 26,250 ft. From a standing start an altitude of 38,400 ft could be reached in 4.5 min. Four flight tests were completed before development of this ‘Heimatschützer’ was discarded in favor of the Messerschmitt Me 262C-3 ‘Heimatschützer IV’. One Messerschmitt Me 262C-1a only was built, but the aircraft shown here could be attached to the JV 44 (Jagd Verband, Pursuit Unit) —- assumed of serial production (Ref.:  7).