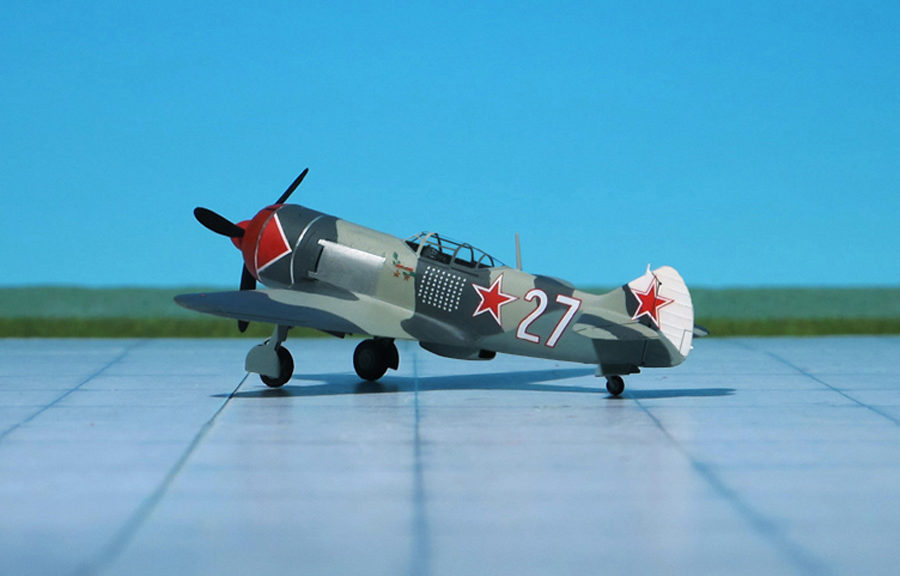 COMMENT: The Lavochkin La-7 was a piston-engine single-seat Soviet fighter aircraft developed during WW II by the Lavochkin Design Bureau. It was a development and refinement of the Lavochkin La-5, and the last in a family of aircraft that had begun with the Lavochkin-Gorbunov-Gudkov LaGG-3 in 1938. Its first flight was in early 1944 and it entered service with the Soviet Air Forces later in the year. The La-7 was felt by its pilots to be at least the equal of any German piston-engined fighter. It was phased out in 1947 by the Soviet Air Force.
By 1943, the La-5 had become a mainstay of the Soviet Air Forces, yet both its head designer, Semyon Lavochkin, as well as the engineers at the TsAGI (Central Aerohydronamics Institute), felt that it could be improved upon. TsAGI refined earlier studies of aerodynamic improvements to the La-5 airframe in mid-1943 and modified Lavochkin La-5FN to evaluate the changes. These included complete sealing of the engine cowling, rearrangement of the wing center section to accommodate the oil cooler and the relocation of the engine air intake from the top of the cowling to the bottom to improve the pilot’s view.
The aircraft was evaluated between December 1943 and February 1944 and proved to have exceptional performance. Using the same engine as the standard La-5FN had a top speed of 425 mph at a height of 20,180 ft, some 40 mph faster than the production La-5FN. It took 5.2 minutes to climb to 16,404 ft. It was faster at low to medium altitudes than the La-5 that used the more powerful prototype Shvetsov M-71 engine.
Lavochkin had been monitoring TsAGI’s improvements and began construction in January 1944 of an improved version of the La-5 that incorporated them as well as lighter, but stronger, metal wing spars to save weight. The La-5, as well as its predecessors, had been built mostly of wood to conserve strategic materials such as aircraft alloys. With Soviet strategists now confident that supplies of these alloys were unlikely to become a problem, Lavochkin was now able to replace some wooden parts with alloy components. In addition Lavochkin made a number of other changes that differed from La-5FN. The engine air intake was moved from the bottom of the engine cowling to the wing roots, the wing/fuselage fillets were streamlined, each engine cylinder was provided with its own exhaust pipe, the engine cowling covers were reduced in number, a rollbar was added to the cockpit, longer shock struts were fitted for the main landing gear while that for the tail wheel was shortened, an improved gunsight was installed, and a new propeller was fitted. Three prototype 20 mm Berezin B-20 autocannon were mounted in the engine cowling, firing through the propeller, arming the 1944 standard-setter.
The prototype only made nine test flights in February and March 1944 before testing had to be suspended after two engine failures, but quickly proved itself to be the near-equal of the La-5FN. It was 180 kilograms lighter than the earlier aircraft, which allowed the La-7 to outclimb the other aircraft. However it was 20.5 mph slower at sea level, but only 2.5 mph slower at 19,685 ft. The flight tests validated Lavochkin’s modifications and it was ordered into production under the designation of La-7, although the B-20 cannon were not yet ready for production and the production La-7 retained the two 20-mm ShVAK cannon armament of the La-5.
Five La-7s were built in March by Factory Nr. 381 in Moscow and three of these were accepted by the Air Force that same month. The Moscow factory was the fastest to complete transition over to La-7 production and the last La-5FN was built there in May 1944. Factory Nr. 21 in Gorky was considerably slower to make the change as it did not exhaust its stock of wooden La-5 wings until October. The quality of the early production aircraft was significantly less than the prototype.
Combat trials began in mid-September 1944 and were generally very positive. However four aircraft were lost to engine failures and the engines suffered from numerous lesser problems, despite its satisfactory service in the La-5FN. One cause was the lower position of the engine air intakes in the wing roots of the La-7 which caused the engine to ingest sand and dust. One batch of flawed wings was built and caused six accidents, four of them fatal, in October which caused the fighter to be grounded until the cause was determined to be a defect in the wing spar.
Production of the first aircraft fitted with three B-20 cannon began in January 1945 when 74 were delivered. These aircraft were 65 kilograms heavier than those aircraft with the two ShVAK guns, but the level speed was slightly improved over the original aircraft. However, the time to climb to 16,404 ft increased by two-tenths of a second over the older model. More than 2000 aircraft were delivered before the war’s end, most by Zavod Nr. 21.
Production of the Lavochkin La-7 amounted to 5,753 aircraft, plus 584 La-7UTI trainers. The follow-up model, the Lavochkin La-9, despite its outward similarity, was a completely new design (Ref.: 24).