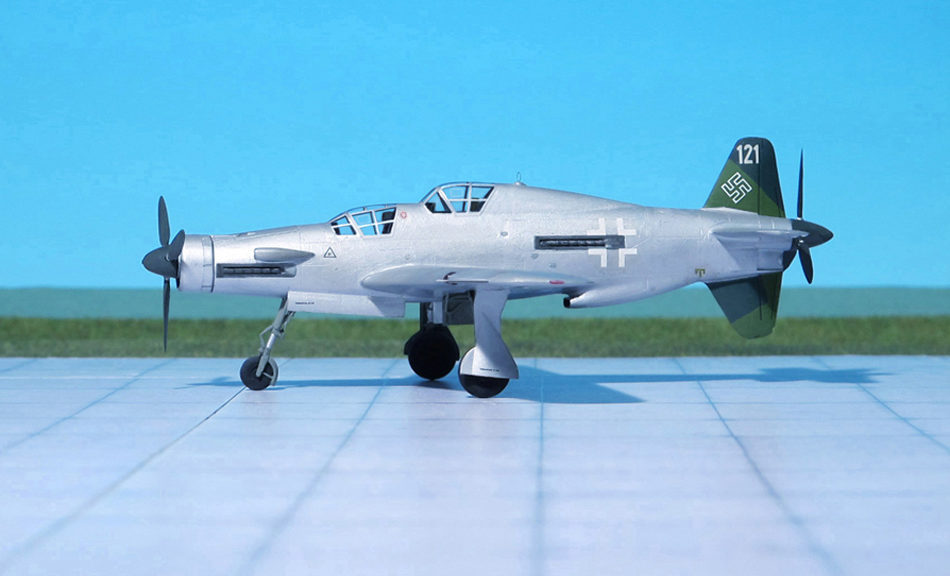 COMMENT: The Dornier Do 335 “Pfeil” (“Arrow”) was a WW II heavy fighter built by the Dornier company. The two-seater trainer version was unofficially called “Ameisenbär (“Anteater”). The Do 335s performance was much better than other twin-engine designs due to its unique push-pull configuration and the lower aerodynamic drag of the in-line alignment of the two engines. It was Germany’s Luftwaffe fastest piston-engine aircraft of World War II. The Luftwaffe was desperate to get the design into operational use, but delays in engine deliveries meant that only a handful were delivered before the war ended.
The Dornier Do 335 V1 first prototype flew for the first time on October 1943. However, several problems during the initial flight of the Do 335 would continue to plague the aircraft through most of its short history. Issues were found with the weak landing gear and with the main gear’s wheel well doors, resulting in them being removed for the remainder of the V1’s test flights. The Do 335 V1 made 27 flights, flown by three different pilots. During these test flights the second prototype Do 335 V2 was completed and made its first flight on end December 1943. New to the V2 were upgraded DB 603A-2 engines, and several refinements learned from the test flights of the V1 as well as further wind tunnel testing.
In early 1944 the Do 335 was scheduled to begin mass construction, with the initial order of 120 preproduction aircraft to be manufactured by DWF (Dornier-Werke Friedrichshafen) to be completed no later than March 1946. This number included a number of bombers, destroyers (heavy fighters), and several yet to be developed variants. At the same time, DWM (Dornier-Werke München) was scheduled to build over 2000 Do 335s in various models, due for delivery in March 1946 as well.
The first preproduction Dornier Do 335A-0s were delivered in July 1944 to the “Erprobungskommando 335” (“Proving detachment 335”) formed for service evaluation purposes.
On May 1944, Hitler, as part of the developing “Jägernotprogramm” (Emergency Fighter Program) directive, which took effect on July that year, ordered maximum priority to be given to Do 335 production. The main production line was intended to be at Manzell, but bombing raids in March destroyed the tooling and forced Dornier to set up a new line at Oberpfaffenhofen.
Among the different variants of the Do 335 under construction were two further two-seat prototypes, the Do 335 V11 and V12, these being respectively prototypes for the Daimler-Benz DB 603A-2-powered Do 335A-10 and DB 603E-1-powered Do 335A-12 dual-control conversion trainer. Having a similar raised second cockpit inserted aft and above the normal cockpit, the Do 335A-10 was equipped with full instrumentation and controls and was occupied by the instructor. The first aircraft were delivered without armament, but similar armament to that of the Do 335A-1 was specified for production models which were interspersed on the Do 335A-1 assembly line, and the genuine production aircraft was, in fact, a Do 335A-12 trainer.
At least 16 prototype Do 335s were known to have flown (V1–V12, and Muster-series prototypes M13–M17) on a number of DB603 engine subtypes including the DB 603A, A-2, G-0, E and E-1. The first preproduction Do 335A-0s were delivered in July 1944. Approximately 22 preproduction aircraft were thought to have been completed and flown before the end of the war including approximately 11 A-0s converted to A-11s for training purposes.
When U.S. forces overran Dornier’s Oberpfaffenhofen factory only 11 Do 335A-1 single-seat fighter bombers and two Do 335A-12 conversion trainers had been completed, but a further nine A-1s, four A-4s and two A-12s were in final assembly, and components and assemblies for nearly 70 additional aircraft had been completed. Production of the Do 335A-6 night and all-weather fighter had been transferred to the Heinkel factory at Vienna, but despite high priority allocated to the program, circumstances prevented the necessary jigs and tools being assembled (Ref: 7, 12).