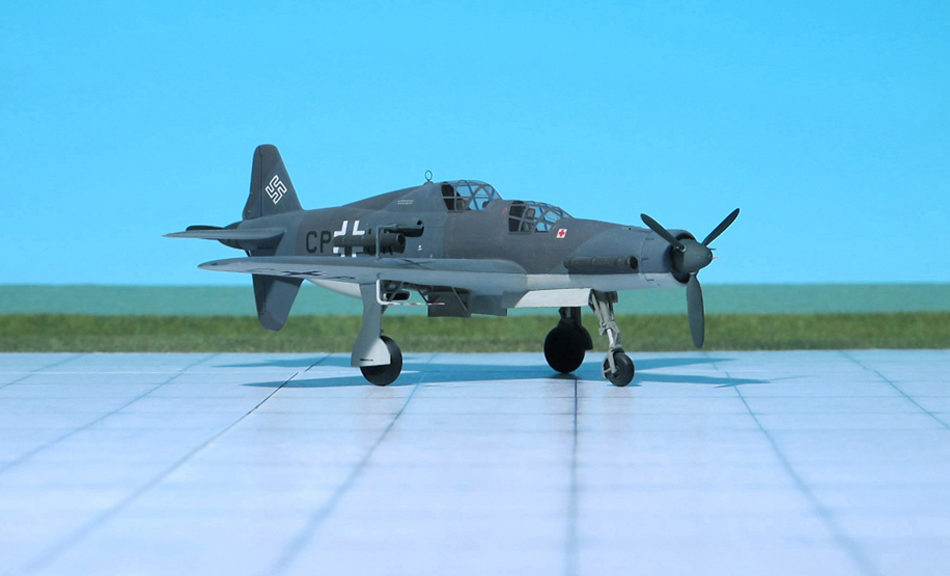 COMMENT: The Dornier Do 335 “Pfeil” (“Arrow”) was a WW II heavy fighter built by the Dornier Company. The Do 335s performance was much better than other twin-engine designs due to its unique push-pull configuration and the lower aerodynamic drag of the in-line alignment of the two engines. It was Germany’s Luftwaffe fastest piston-engine aircraft of World War II. The Luftwaffe was desperate to get the design into operational use, but delays in engine deliveries meant that only a handful were delivered before the war ended.
In early 1944 the Do 335 was scheduled to begin mass construction, with the initial order of 120 preproduction aircraft to be manufactured by DWF (Dornier-Werke Friedrichshafen) to be completed no later than March 1946. This number included a number of bombers, destroyers (heavy fighters), and several yet to be developed variants. At the same time, DWM (Dornier-Werke München) was scheduled to build over 2000 Do 335s in various models, due for delivery in March 1946 as well.
While the Dornier Do 335A-0 assembly line at Oberpfaffenhofen was struggling to overcome delays in deliveries of power plants, airscrews, radio equipment and sub-contracted components and assemblies, a number of “Versuchs” (Test) machines for other “Pfeil” subtypes joined the test programme, these including the first two seat models, the Do 335A-6 bad-weather and night interceptor and the Do 335A-12 trainer..
The Dornier Do 335 V10 was the first prototype for the Do 335A-6 radar-equipped two set all weather and night interceptor in which a second cockpit for the radar operator was inserted aft and above the normal cockpit. In order to provide space for the additional cockpit the fuel tankage was drastically revised, the weapon bay being deleted and its space utilized for fuel, fuselage tankage being increased substantially. Cannon armament remained unchanged, but a FuG 101a radio altimeter was
introduced together with FuG 217J-2 “Neptun” intercept radar with wing-mounted antennae. Exhaust flame damping tubes for the fore and aft engines added their measure of drag to that provides by the second cockpit and the radar antennae, and normal loaded weight increased by app. 500 kg. Performance accordingly fell by 10 per cent, but whereas the Do 335 V10 had Daimler-Benz DB 603A-2 engines, the production Do 335 A-6 was intended to have DB 603E engines with provision for methanol-water injection (MW 50) for power boosting below the rated altitude of power plants. Provision was to be made in the wings for two MW 50 tanks, power being boosted to 2,400 hp at sea level per engine.
Production of the Dornier Do 335A-6 night and all-weather fighter had been transferred to the Heinkel factory at Vienna, but despite high priority allocated to the program, circumstances prevented the necessary jigs and tools being assembled (Ref: 7, 12).