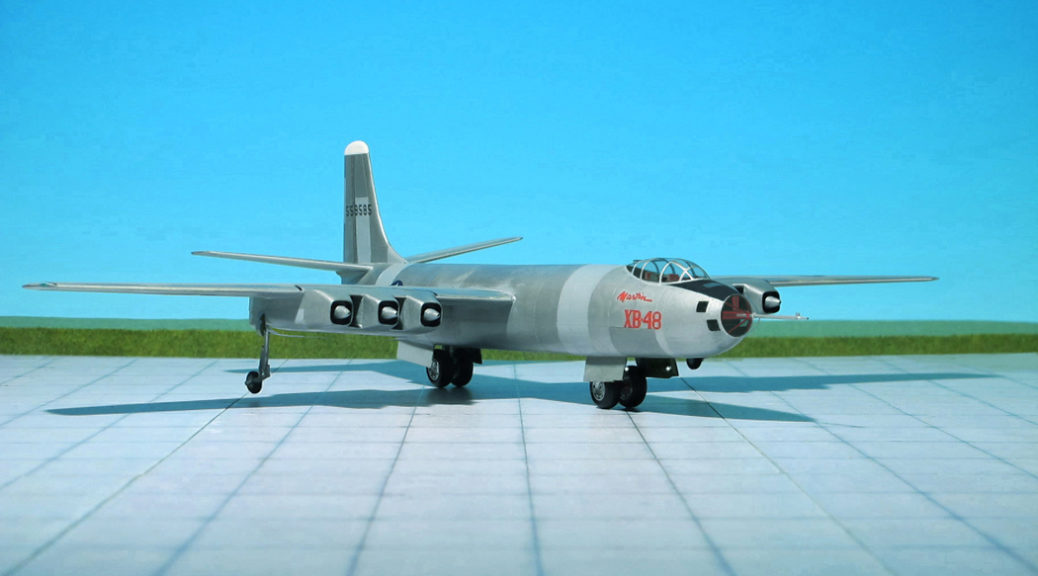 COMMENT: The Martin XB-48 was an American medium jet bomber developed in the mid-1940s. It competed with the Boeing B-47 “Stratojet”, which proved to be a superior design, and was largely considered as a backup plan in case the B-47 ran into development problems. It never saw production or active duty, and only two prototypes were built.
In 1944, the U.S. War Department was aware of aviation advances in Germany and issued a requirement for a range of designs for medium bombers weighing from 80,000 lb (36,287 kg) to more than 200,000 lb (90,718 kg). Other designs resulting from this competition, sometimes named “the class of ’45”, included the North American XB-45 and the Convair XB-46. Production orders finally went to the North American B-45 “Tornado”, and even this airplane served only for a couple of years before again being replaced by the much more modern Boeing B-47 “Stratojet”, although the B-45 had enough “utility” built in to maintain a niche as a reconnaissance aircraft.
In retrospect, the “class of ’45” were transitional aircraft, combining the power of turbojets with the aeronautical knowledge of World War II. The XB-48 was no exception, as its round fuselage and unswept wings showed a distinct influence of Martin’s B-26 “Marauder” medium bomber. Still, where the B-26 had enough thrust with two massive 18-cylinder radial engines, the XB-48 needed no less than six of the new jet engines.
Although the pictures make it look as if the aircraft had three engine nacelles under each wing, the jet engines were actually clustered in a pair of flat three-engined nacelles with an intricate system of air ducts between the engines, intended to facilitate cooling. At the time of the XB-48’s design, jet propulsion was still in its infancy.
The XB-48 was the first aircraft designed with bicycle-type tandem landing gear, which had previously been tested on a modified B-26. The wing airfoil was too thin to house conventional landing gear mechanisms. The main landing gear was in the fuselage and small outriggers located on each wing were used to balance the aircraft.
The XB-48 made its first flight on 22 June 1947, a 37-minute, 117 km hop from Martin’s Baltimore, Maryland plant to NAS Patuxent River, Maryland, but blew all four tires on its fore-and-aft mounted undercarriage on landing when the test pilot applied heavy pressure to the specially-designed, but very slow to respond, insensitive air-braking lever.
In 1948 the Martin XB-48 program was cancelled (Ref.: 24).