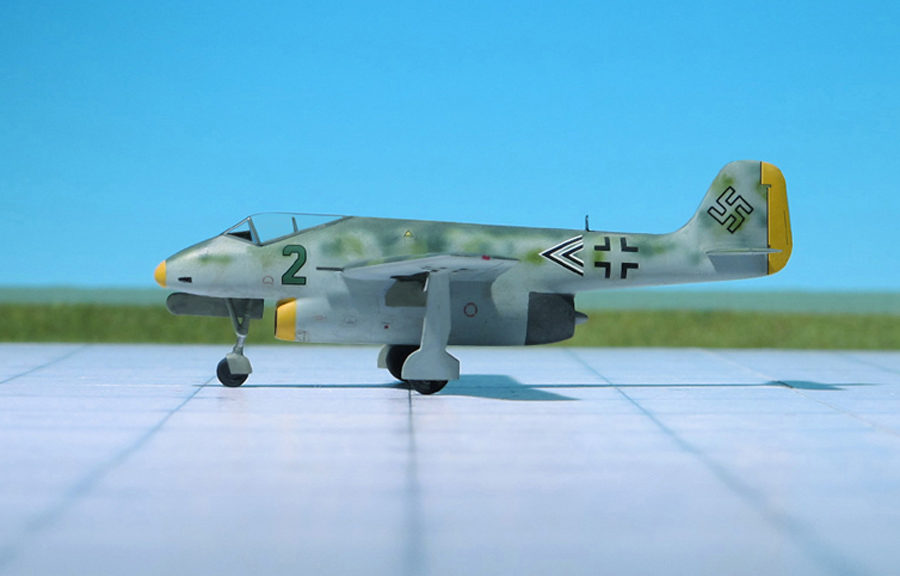 COMMENT: The earliest known Focke-Wulf attempt at a single-turbojet fighter, shown in a drawing dated November 1942, the Focke-Wulf Fw 190TL, had involved simply bolting a very basic in-house designed turbojet Fw T.1 to the front of an operational Fw 190.
On January 1943, company aerodynamicist J. C. Rotta offered a report entitled “Fundamentals For The Design of a Turbojet Fighter” which looked at how a large turbojet fighter ought to be, what sort of shape and layout would be best, what turbojet engines could be fitted and how, what the advantages and disadvantages of piston engines and turbojet engines were and what aerodynamic issues were.
To illustrate his points, Rotta came up with a trio of remarkably foresighted designs:

Each of the three designs had its turbojet engine mounted on its back, just as the Heinkel He 162 would be configured 20 months later. The first and third designs also had forward-swept wings and backward-swept V-tails. The second BMW powered P 3302 design had unswept wings and an unswept V-tail.
However, Focke-Wulf’s design team seem to have completely ignored Rotta’s ideas when they actually started work on a series of single-seat, single-engine turbojet fighters. A report from August 1944 charts the team’s progress through seven different designs.
The first of these, dated March, 1943, was a tail-sitter based on a Fw 190 but with the cockpit relocated to the nose in place of the familiar BMW 801 piston engine, with the turbojet positioned directly below. But with this arrangement no satisfactory rolling properties were to be expected and there was also the risk of burning the airfield surface.
The second design from June, 1943, seems th have been more highly regarded and had its own separate “Baubeschreibung” (Construction description) number, the closest thing Focke-Wulf had to a “P” designation.
The wing was mounted mid-fuselage and had a slight sweep on the leading edge and straight trailing edges, the tailplane was similar to the Fw 190. The design had a tricycle undercarriage and a Junkers Jumo 004B turbojet engine was positioned more centrally under the fuselage. The cockpit was heavily protected by armor of varying thicknesses. Armament was to be two MK 108 (70 rounds each) or MK 103 30mm cannon in the fuselage nose and two MG 151/20 20mm cannon (175 rounds each) in the wing roots.
The main advantage of positioning the turbojet engine under the fuselage was to facilitate maintenance, but there were several bigger disadvantages to this design, such as the nose wheel blocking the intake on take-off and landing, objects being sucked into the air intake since it was so close to the ground. and the damage or destruction of the turbojet engine in case of a belly landing.
Finally, this design was rejected.
As far as the other five different designs are concerned.  Two oft them were basis for the later Focke-Wulf twin-boom Fighter Projekt VIII „Flitzer“ („Streaker“) and  swept-wing, high-mounted tailplane featured Focke-Wulf  interceptor Ta 183 „Huckebein“ (Ref: 17, Uhr, D. and D. Sharp: „Luftwaffe:Secret Projects Profile“, Mortons Media Group Ltd., Horncastle, U.K., 2018).