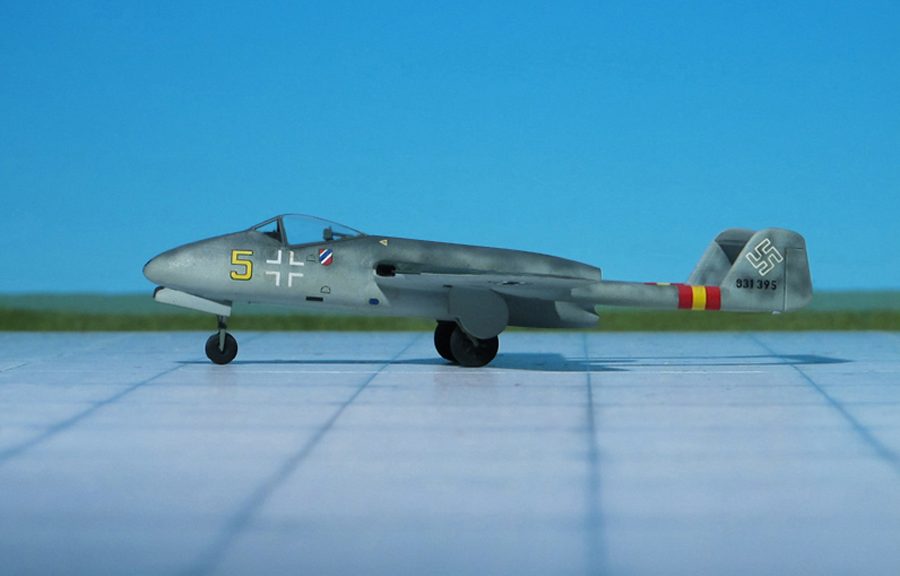 COMMENT: In March 1943 the Focke-Wulf design team in Bremen initiated a series of studies for single-seat, single turbo jet powered fighters. “Entwurf 6”, also known as “Projekt VI”, was approved for mock-up construction in February 1944. The designation was later changed to “Projekt VII” and was given the code name “Flitzer“ (“Streaker” or “Dasher”). The design had mid-fuselage mounted wings with moderate sweepback (32 degrees), air inlets in the wing roots, twin booms, a high mounted tail plane and a tricycle landing gear. For high speed interception the single He S 011A turbojet was to be supplemented with a Walter HWK 509 A-2 bi-fuel rocket mounted below the turbojet engine. This arrangement was later revised and the rocket engine was eliminated. Projected armament consisted of two MK 103 30mm cannon or two MK 108 30mm cannon in the lower nose and two MG 151/20 20mm cannon in the wings. The Focke-Wulf “Flitzer” was well advanced in development, a full-size mock-up and some prototype sub-assemblies being completed. The project was eventually abandoned in favor of the Focke-Wulf Ta 183 “Huckebein”. In the meantime this design was in an advanced stage for series production.

Noteworthy is the fact that the Focke-Wulf “Flitzer” project had great similarity with the contemporary British de Havilland DH 100 “Vampire” (Ref.: 17, 24).