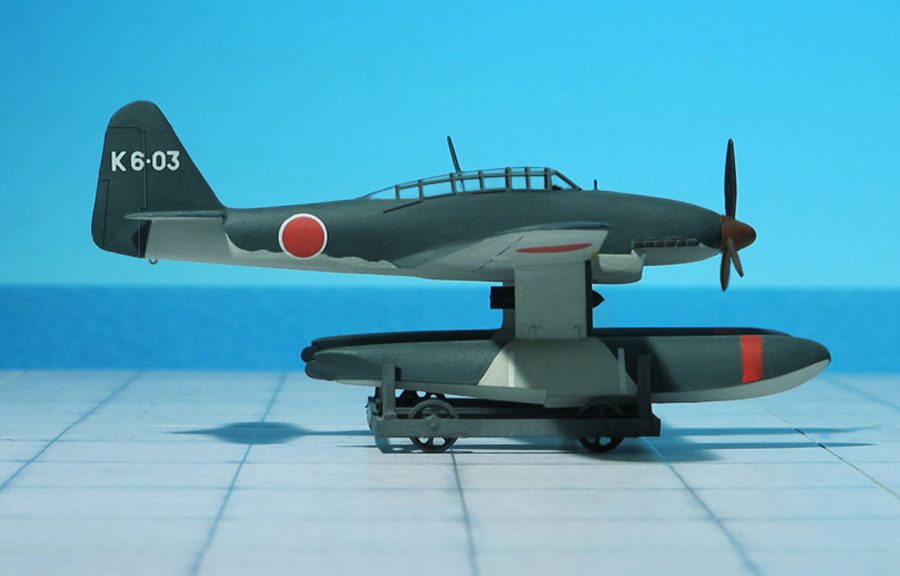 COMMENT: To equip the I-400 class submarine aircraft carriers, the Imperial Japanese Navy Air service requested for an attack aircraft with a range of 1,000 mi and a speed of 345 mph. Aichi aircraft company proposed a design on the basis of the Yokosuka D4Y1 “Suisei” that Aichi was already manufacturing under license. The D4Y1 was a relatively small single-engine carrier dive bomber with exceptionally clean lines and high performance. Detailed engineering studies commenced in an effort to modify the “Suisei” for use aboard the I-400 submarines but the difficulties in doing so were eventually judged insurmountable and a completely new design was initiated.
Aichi’s final design, designated M6A1, was a two-seat, low-winged monoplane powered by an Aichi “Atsuka” engine, a license-built copy of the German Daimler-Benz DB 602  liquid-cooled engine. The aircraft was fitted with detachable twin floats to increase its versatility. If conditions permitted, these would allow the aircraft to alight next to the submarine, be recovered by crane and then re-used. The floats could be jettisoned in flight to increase performance or left off altogether for one-way missions. The “Seiran’s” wings rotated 90 degrees and folded hydraulically against the aircraft’s fuselage with the tail also folding down to allow for storage within the submarine’s 11 ft diameter cylindrical hangar.
As finalized, each I-400 class submarine had an enlarged watertight hangar capable of accommodating up to three M6A1s. The “Seirans” were to be launched from an 85 ft compressed-air catapult mounted on the forward deck. A well-trained crew of four men could roll a “Seiran” out of its hangar on a collapsible catapult carriage, attach the plane’s pontoons and have it readied for flight in approximately 7 minutes.
The first of eight prototypes was completed in October 1943, commencing flight testing in November that year. A problem with overbalance of the auxiliary wings was eventually solved by raising the height of the tail fin. Further testing was sufficiently successful for production to start in early 1944.  Owing to the reduced carrier submarine force, production of the “Seiran” was halted, with a total of 28 completed. In mid 1945, it was planned to attack the American base at Ulithi Atoll where forces, including aircraft carriers, were massing in preparation for attacks on the Japanese Home Islands. The flotilla departed Japan on 23 July 1945 and proceeded towards Ulithi. On 16 August, the flagship I-401 received a radio message from headquarters, informing them of Japans surrender and ordering them to return to Japan. All six “Seirans” on board the two submarines, having been disguised for the operation as American planes in violation of the laws of war, were catapulted into the sea with their wings and stabilizers folded (for the  submarine I-401) or pushed overboard (for the submarine I-400) to prevent capture (Ref.: 24).

Noteworthy is the fact that the German Marine Luftwaffe made similar attempts for submarine-borne aircraft, e. g. the Arado Ar 231.