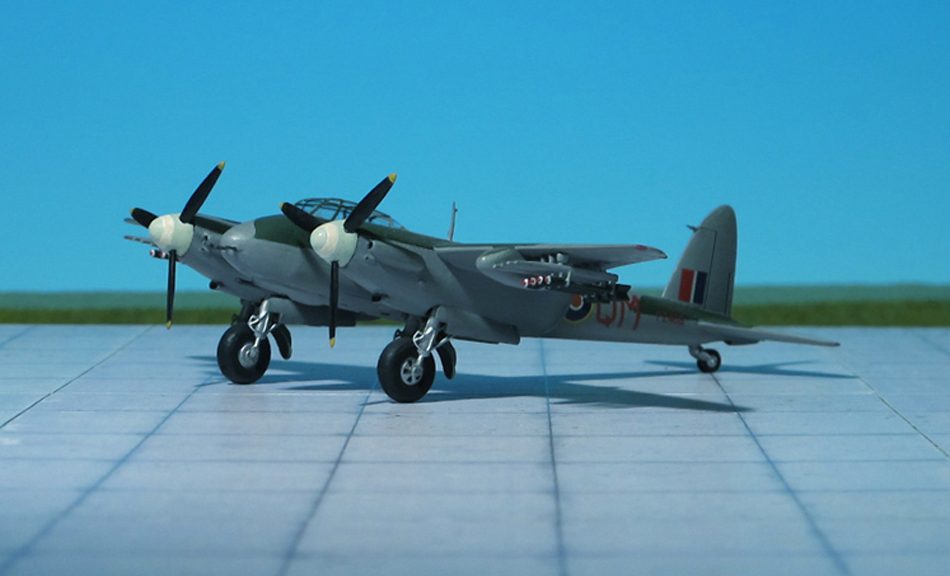 COMMENT: The de Havilland DH.98 “Mosquito” was a British twin-engine shoulder-winged multi-role combat aircraft during WW II. It was one of few operational front-line aircraft of the era whose frame was constructed almost entirely of wood and was nicknamed “The Wooden Wonder”. The “Mosquito” was also known affectionately as the “Mossie” to its crews. Originally conceived as an unarmed fast bomber, the “Mosquito” was adapted to roles including low to medium-altitude daytime tactical bomber, high-altitude night bomber, pathfinder day or night fighter, fighter bomber, intruder, maritime strike aircraft, and fast phot-reconnaissance aircraft.
One fighter-bomber variant was the “Mosquito F.B. Mk XVIII” (sometimes known as the “Tse-tse”) of which one was converted from a F.B. Mk VI to serve as prototype and 17 were purpose-built. The F.B. Mk XVIII was armed with a Molins “6-pounder Class M” cannon: this was a modified QF 6-pounderanti-tank gun fitted with an auto-lader to allow both semi- or fully automatic fire. 25 rounds were carried, with the entire installation weighing 720 kg.  In addition, 410 kg of armour was added within the engine cowlings, around the nose and under the cockpit floor to protect the engines and crew from heavily armed U-boats, the intended primary target of the Mk XVIII. Two or four 7.7 mm Browning machine guns were retained in the nose and were used to “sight” the main weapon onto the target.
The Air Ministry initially suspected that this variant would not work, but tests proved otherwise. Although the gun provided the “Mosquito” with yet more anti-shipping firepower for use against U-boats, it required a steady approach run to aim and fire the gun, making its wooden construction an even greater liability, in the face of intense anti-aircraft fire. The gun was sensitive to sideward movement; an attack required a dive from 5,000 ft at a 30° angle with the turn and bank indicator on center. A move during the dive could jam the gun. The prototype was first flown on 8 June 1943.
Although only twenty-seven “Mosquito F.B. XVIII” were produced, they proved particularly efficacious against shipping, submarines and shore installations (Ref.: 24).