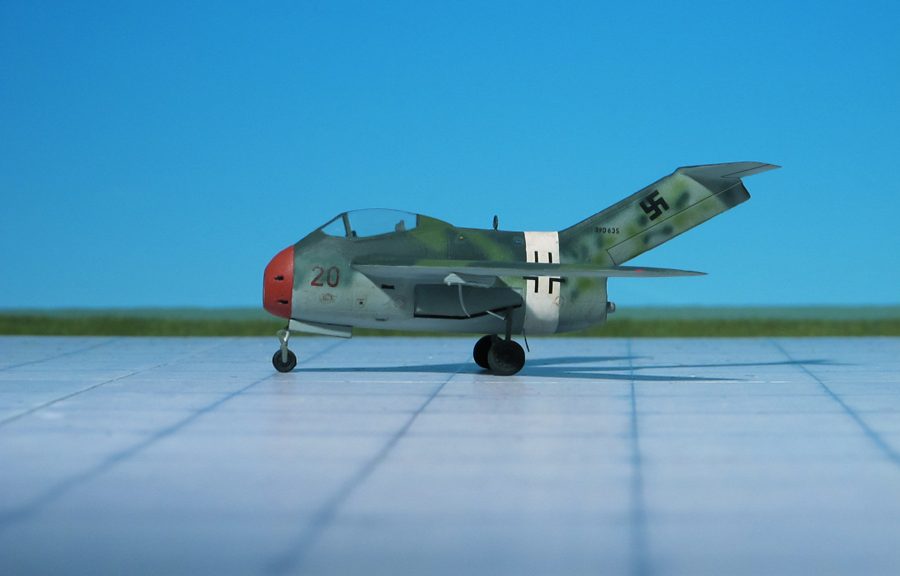 COMMENT:  In early 1944, the RLM (Reichsluftfahrtministerium, Reich Air Ministry) became aware of Allied jet developments, and were particularly concerned that they might have to face the Gloster Meteor  over the continent. In response, they instituted the Jägernotprogramm (Fighter emergency program) which took effect on July 3, 1944, ending production of most bomber and multi-role aircraft in favour of fighters, especially jet fighters. Additionally, they accelerated the development of experimental designs that would guarantee a performance edge over the Allied designs, designs that would replace the first German jet fighters, the Messerschmitt Me 262  and Heinkel He 162. Focke-Wulf Company proposed its design Focke-Wulf Ta 183 Huckebein, powered by the advanced Heinkel-Hirth HeS 011 turbojet, although the first prototypes were to be powered by the Junkers Jumo 004B. The wings of the new design were swept back at 40° and were mounted in the mid-fuselage position. The wings appear to be mounted very far forward compared with most designs, a side-effect of attempting to keep the center of pressure (CoP) of the wing as a whole as close to the middle of the fuselage as possible. The original design used a T-tail, with a notably long vertical stabilizer and a seemingly undersized horizontal stabilizer. The vertical tail was swept back at 60°, and the horizontal tail was swept back and slightly dihedralled. Many problems beset the project, work therefore concentrated on the much less problematical Focke-Wulf Projekt VII “Flitzer”. However, when the RLM eventually rejected that design and in late 1944 the Focke Wulf Ta 183 Huckebein was again brought to the fore. Detailed blue-prints were readied in beginning of 1945 and construction of several prototypes began immediately. The first flight of the aircraft was scheduled for May 1945, but none aircraft was completed by 8 April 1945, when British troops captured the Focke-Wulf facilities.
The name “Huckebein” is a reference to a trouble-making raven (Hans Huckebein, der Unglücksrabe) from an illustrated story in 1867 by famous cartoonist Wilhelm Busch. (Ref.:24).