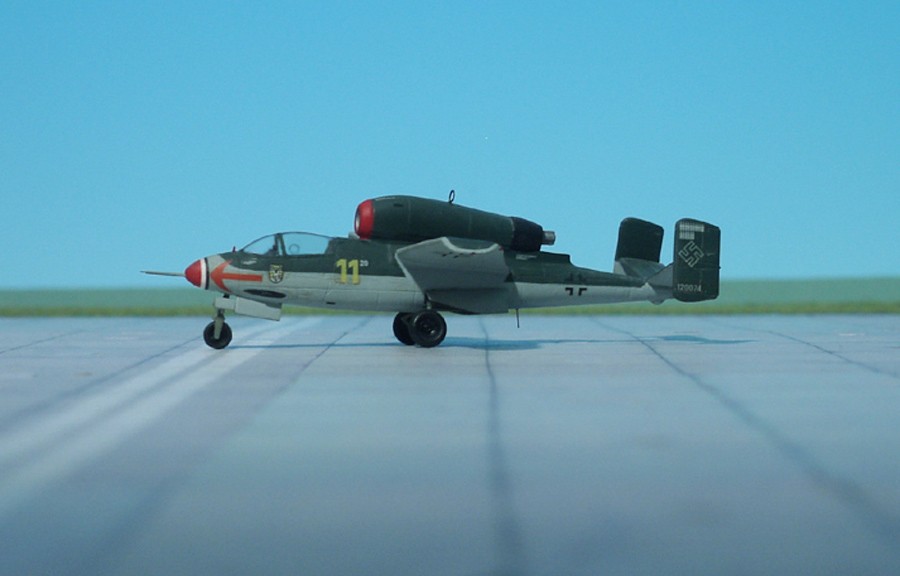 COMMENT: The so-called “Volksjäger (Peoples Fighter) project was started on September 8th, 1944 when the basic project requirements were issued by the Technisches Amt des RLM (Technical Office of the State Ministry of Aviation) and the Jägerstab (Fighter Staff) to several aircraft companies as Arado, Blohm & Voss, Fieseler, Focke-Wulf, Heinkel, Messerschmitt, and Junkers. It was envisaged a simple, inexpensive fighter, suitable for quantity production from easy-available materials by semi-skilled and unskilled labour. The Volksjäger was to be powered by a single BMW 003 “Sturm” (“Storm”) turbojet and had to be ready for mass production by January 1st, 1945.
Messerschmitt had refused to submit any proposal and nearly all other designs – e. g. Arado E 580, Junkers EF 123 – were found unsuitable. Only Blohm & Voss’s project Bv P.211 being adjudged the best of those submitted. On September 19th, a further conference was held at which all proposals were reviewed. This time the Siebel Aircraft Company took part instead of Messerschmitt. Again it was decided that the Blohm & Voss contender, the Bv P.211, was superior in every respect to all other contenders. But after misunderstandings and disputes it was decided that the Heinkel design He P.1073 was best suited for the future Volksjäger. Immediately construction of the P.1073 began, work on detailed drawings in parallel. In October 1944 the design was redesignated as He 162, code name “Spatz” (“Sparrow”). Orders were given for immediate quantity production with an output of 1,000 aircraft monthly. Within 90 days the He 162 was conceived, designed, built and flown. The first unit to train on the He 162 was the I Gruppe/JG 1. Only 320 He 162 were built before the end of the hostilities, 800 more had reached advanced stages of assembly. There are no veritable reports that the He 162 was involved in combat. (Ref.: 7)