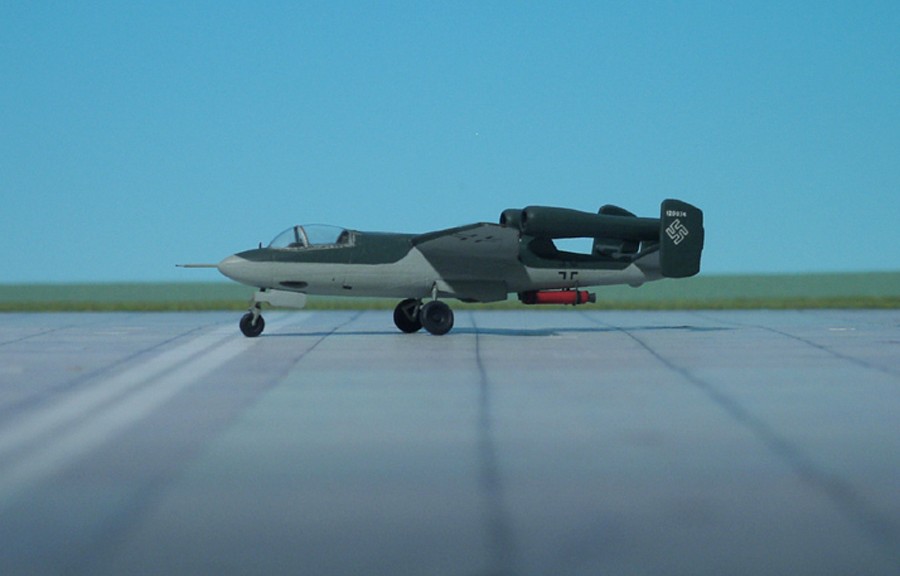 COMMENT: From the outset of the He 162 programme, the Heinkel team had envisaged the eventual use of the Heinkel-Hirth 011A (HeS 11A) turbojet in the He 162 aircraft as the He 162B-1. Possessing a similar structure to that of the A-series fighter, the He 162B had a lengthened fuselage which permitted an increase of internal fuel capacity. Due to the slow production rate of that engine, in early 1945 the Nazi Party Leader Saur’s Fighter Air Staff requested proposals for the adaptation of the He 162 to take the Argus-Röhre, a simple pulse jets or intermittent propulsive ducts. Heinkel as well as the RLM’s Technische Amt found that the Argus-Röhren were totally unsuited for fighter installation. But nevertheless, project studies were started by adapting a He 162B-series airframe to take either one or two Argus-Rohr units. The first arrangement called for the two Argus-Röhren As 014 with 333 kp thust each to be mounted side-by-side over the rear fuselage. Apart from excessive vibration the aircraft needed two Schmidding 109-533 solid-fuel take-off rockets with 1,000kp thrust for 12 sec. each. The high fuel consumption of the pulse jet militated against its used as a “Volksjäger power plant. As Heinkel had little enthusiasm for the Argus-Rohr-powered He 162, this programme advanced no further than the drawing board. (Ref.: 7)