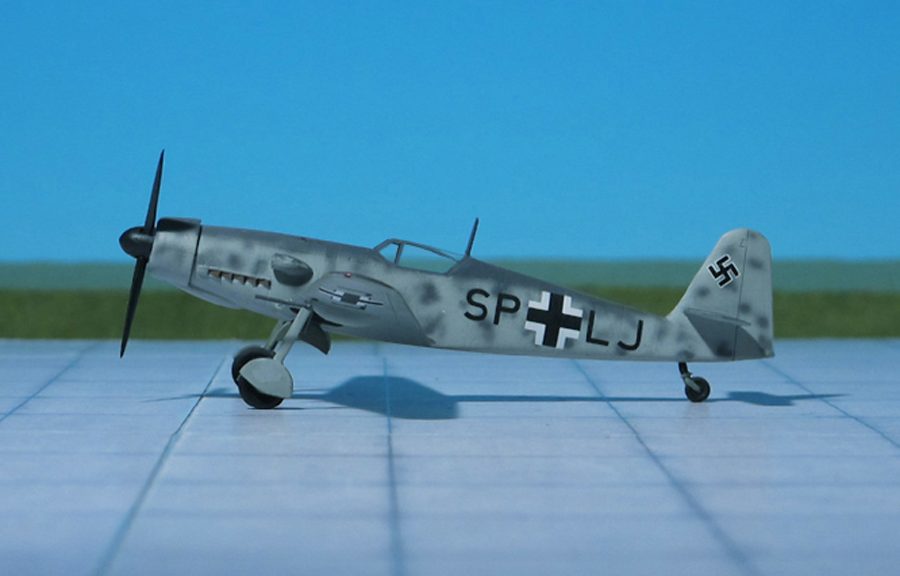 COMMENT: Despite the total failure of the Messerschmitt Me 209 V4 and the disappointing performance of the Messerschmitt Me 309, the Messerschmitt design bureau was still determined to provide the successor of the Messerschmitt Me 109 in the Luftwaffe’s fighter arm and a competitor for Focke-Wulf’s Fw 190D and Ta 152 fighters. It was realized that no useful purpose could be served in attempting any further development  of the original Messerschmitt Me 209, and it was decided, therefore, to produce an entirely new fighter design which, in order to accelerate development and subsequent production, was to use a large proportion of standard Me 109 components. The new fighter was designated Messerschmitt Me 209-II and was, in fact, a modernized, more powerful Me 109G and employed sixty-five per cent of the earlier fighter’s components. The Me 209-II adopted an exceptionally wide-track, inward retracting undercarriage. Another major change was the installation of a Daimler-Benz DB 603G with an annular radiator. Overall wingspan was substantially increased and the vertical tail surfaces were enlarged.  The prototype for the Me 209-II, the Me 209 V5 (A-1), was flown for the first time on November 1943 and tests revealed that the aircraft processed an excellent performance and overcame most of the Me 109’s shortcomings. Shortages of the DB 603G engine resulted in a demand for the installation of the Junkers Jumo 213E liquid-cooled engine. Designated Me 209A-2 flight trials began in December 1943. By this time, however, the Focke-Wulf Fw 190D-9 was entering service and this fighter had a speed advantage of some 30 mph at altitude, and as the introduction of the Me 209-II would disrupt fighter deliveries at a critical phase of the air war, it was decided to discontinue the development of the Messerschmitt design (Ref.: 11).