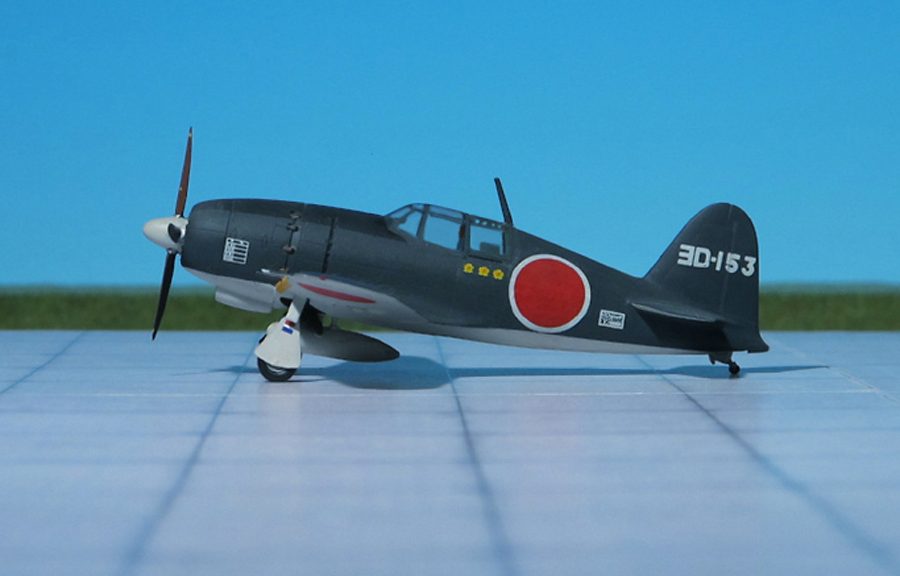 COMMENT: The Mitsubishi J2M “Raiden” was a single-engine land-based fighter aircraft used by the Imperial Japanese Navy Air Force in World War II. The Allied reporting name was “Jack”. The J2M was designed to be a strictly local-defense interceptor, intended to counter the threat of high-altitude bomber raids, and thus relied on speed, climb performance, and armament at the expense of maneuverability. The J2M was a sleek, but stubby craft with its over-sized Mitsubishi Kasei engine buried behind a long cowling, cooled by an intake fan and connected to the propeller with an extension shaft.
Teething development problems stemming from the Kasei engine cooling system, and the main undercarriage members led to a slowdown in production.  The first few produced J2M2s were delivered to the development units in December 1942 but severe problems were encountered with the engines. Trials and improvements took almost a year and the first batch of the serial built J2M2 was delivered in December 1943. Parallel with the J2M2, production of the J2M3 “Raiden” started. The first J2M3s appeared in October 1943 but deliveries to combat units started at the beginning of February 1944.The “Raiden” made its combat debut in June 1944 during the Battle of Philippine Sea. Several J2Ms operated from Guam and Saipan and a small number of aircraft were deployed to the Philippines.
Primarily designed to defend against the Boeing B-29 “Superfortress”, the lack of a turbocharger handicapped the aircraft at high altitude. However, its four-cannon armament supplied effective firepower and the use of dive and zoom tactics allowed it to score occasionally. Insufficient numbers and the American switch to night bombing in March 1945 limited its effectiveness (Ref.: 24).