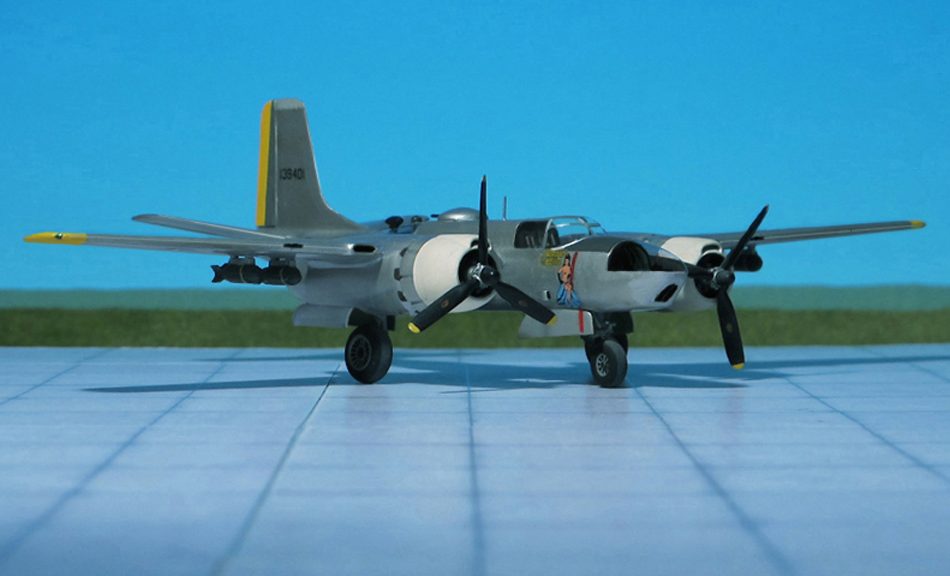 COMMENT: The Douglas A-26 “Invader” was Douglas Aircraft’s successor to the A-20 “Havoc”, in British service known as Douglas “Boston”, and was one of the most successful and widely operated types flown by Allied air forces in World War II. It was a twin-engine light bomber and ground attack aircraft, was fast and capable of carrying twice its specified bomb load.
A re-designation of the type from A-26 to B-26 led to confusion with the Martin B-26 “Marauder”, which first flew in November 1940, about 16 months before the Douglas design’s maiden flight. Although both types were powered by the widely used Pratt & Whitney R-2800 “Double Wasp” eighteen-cylinder, double-row radial engine, they were completely different and separate designs. Roughly 5,300 Martin “Marauders”, originated in 1939, were produced twice as many in comparison to the Douglas design.
The Douglas XA-26 prototype first flew on July 1942. Flight tests revealed excellent performance and handling, but problems with engine cooling led to cowling changes and elimination of the propeller spinners on production aircraft. Repeated collapses during testing led to strengthening of the nose landing gear. The Douglas A-26 was originally built in two different configurations. The Douglas A-26B had a gun nose housed six to eight .50 caliber machine guns, officially termed the “all-purpose nose”, later commonly known as the “six-gun nose” or “eight-gun nose”. The Douglas A-26C’s “glass” nose, officially termed the “Bombardier nose”, contained a Norden bombsight for medium altitude precision bombing. The A-26C nose section included two fixed M-2 guns, later replaced by underwing gun packs or internal guns in the wings.
After about 1,570 production aircraft, three guns were installed in each wing, coinciding with the introduction of the “eight-gun nose” for A-26Bs, giving some configurations as many as 14 .50 in machine guns in a fixed forward mount. The A-26C nose section could be exchanged for an A-26B nose section, or vice versa, in a few man-hours, thus physically changing the designation and operational role. The “flat-topped” canopy was changed in late 1944 after about 820 production aircraft, to a clamshell style with greatly improved visibility. Alongside the pilot in an A-26B, a crew member typically served as navigator and gun loader for the pilot-operated nose guns. In an A-26C, that crew member served as navigator and bombardier, and relocated to the nose section for the bombing phase of an operation In most missions, a third crew member in the rear gunner’s compartment operated the remotely controlled dorsal and ventral gun turrets, with access to and from the cockpit possible via the bomb bay only when that was empty (Ref.: 24).