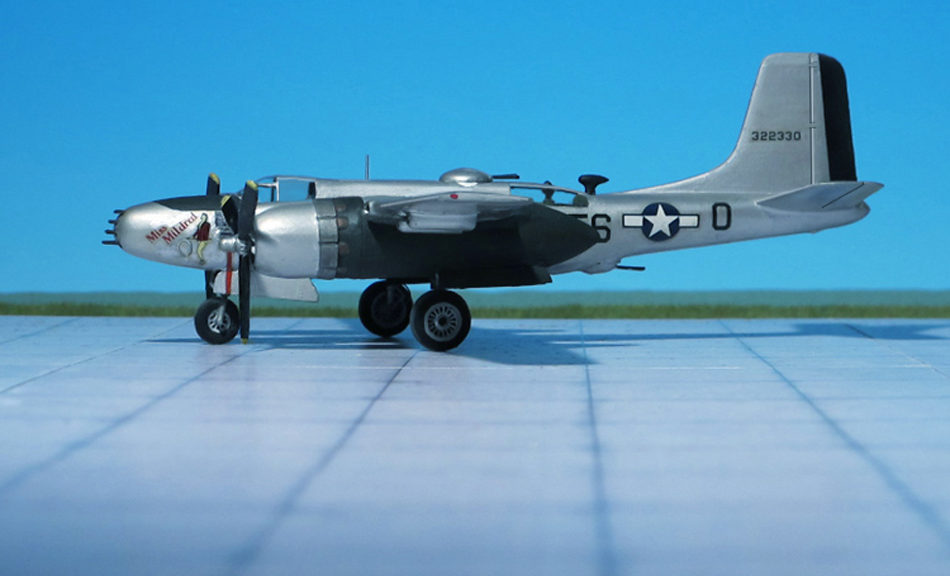 COMMENT: The A-26 “Invader” was Douglas Aircraft’s successor to the A-20 (DB-7) “Havoc”, also known as Douglas “Boston”, one of the most successful and widely operated types flown by Allied air forces in World War II. The Douglas XA-26 prototype first flew on 10 July 1942. Flight tests revealed excellent performance and handling, but problems with engine cooling led to cowling changes and elimination of the propeller spinners on production aircraft. Repeated collapses during testing led to strengthening of the nose landing gear.
The Douglas A-26 was originally built in two different configurations. The Douglas A-26B had a gun nose, which originally could be equipped with a combination of armament including 12.7 mm machine guns, 20mm or 37mm auto cannon, or even a 75mm pack howitzer (which was never used operationally). Normally the gun nose version housed six (or later eight) .50 caliber machine guns, officially termed the “all-purpose nose”, later commonly known as the “six-gun nose” or “eight-gun nose”. The Douglas A-26C “Invader” had a glass” nose, officially termed the “Bombardier nose” and contained a Norden bombsight for medium altitude precision bombing.
After about 1,570 production aircraft, three guns were installed in each wing, coinciding with the introduction of the “eight-gun nose” for A-26Bs, giving some configurations as many as 14 12.7 mm machine guns in a fixed forward mount. A-26C nose section could be exchanged for an A-26B nose section, or vice versa, in a few man-hours, thus physically and officially changing the designation and operational role. The “flat-topped” canopy was changed in late 1944 after about 820 production aircraft, to a clamshell style with greatly improved visibility.
Alongside the pilot in an A-26B, a crew member typically served as navigator and gun loader for the pilot-operated nose guns. A tractor-style “jump seat” was located behind the “navigator’s seat”. In most missions, a third crew member in the rear gunner’s compartment operated the remotely controlled dorsal and ventral gun turrets, with access to and from the cockpit possible via the bomb bay but only when that was empty. The gunner operated both dorsal and ventral turrets via a novel and complex (and problematic) dual-ended periscope sight, which was a vertical column running through the center of the rear compartment, with traversing and elevating/depressing periscope sights on each end. The gunner sat on a seat facing rearward, and looked into a binocular periscope sight mounted on the column, controlling the guns with a pair of handles on either side of the column. When aiming above the centerline of the aircraft, the mirror in the center of the column would flip, showing the gunner what the upper periscope was seeing. When he pressed the handles downward, as the bead passed the centerline the mirror would automatically flip, transferring the sight “seamlessly” to the lower periscope. The guns would aim wherever the periscope was aimed, automatically transferring between upper and lower turrets as required, and computing for parallax and other factors. While novel and theoretically effective, a great deal of time and trouble was spent trying to get the system to work effectively, which delayed production, and it was difficult to keep maintained in the field even once production started.
The Douglas Company began delivering the production model A-26B to the USAAF on September 1943, with the new bomber first seeing action with the Fifth Air Force in the Southwest Pacific Theater on June 1944, when Japanese-held islands near Manokwari were attacked. The pilots in the 3rd Bomb Group’s 13th Squadron, “The Grim Reapers”, who received the first four A-26s for evaluation, found the view from the cockpit to be restricted by the engines and thus inadequate for low-level attack. General George Kenney, commander of the Far East Air Forces stated that, “We do not want the A-26 under any circumstances as a replacement for anything”.
Douglas needed better results from the “Invader’s” second combat test, so A-26s began arriving in Europe in late September 1944 for assignment to the Ninth Air Force. The initial deployment involved 18 aircraft and crews assigned to the 553rd Squadron of the 386th Bomb Group. This unit flew its first mission on September 1944. No aircraft were lost on the eight test missions, and the Ninth Air Force announced that it was happy to replace all of its Douglas A-20s and Martin B-26 “Marauders” with the Douglas A-26 “Invader” (Ref.: 24).