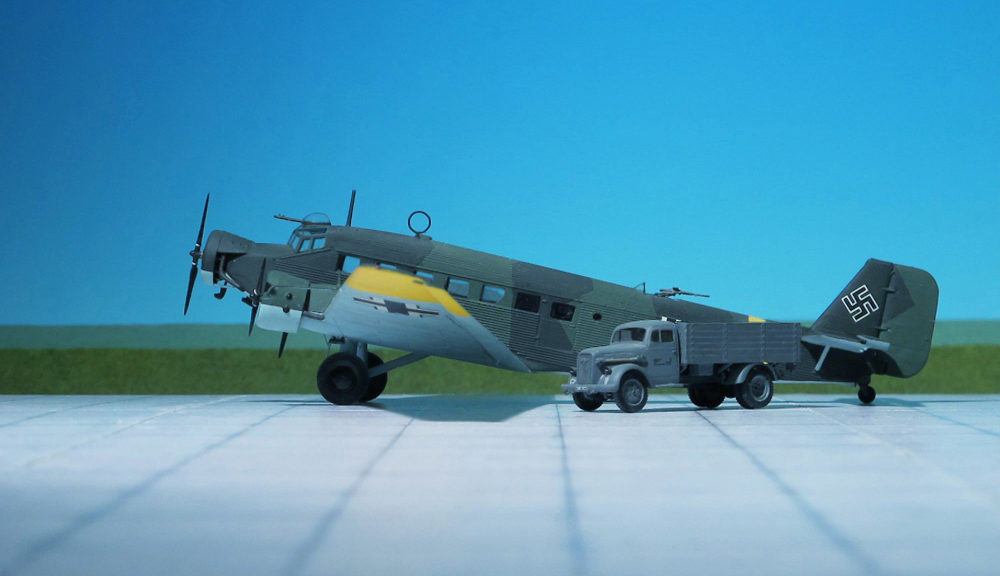 COMMENT: The Junkers Ju 52/3m (nicknamed “Tante Ju”, “Aunt Ju”) was German trimotor transport aircraft manufactured in Germany from 1931 until the end of WW II. In total 4.845 aircraft have been built.
Initially designed with a single engine but subsequently produced as a trimotor, Junkers Ju 53 /3m – suffix “3m” means “Drei Motoren” (three engines) it saw both civilian and military service from mid1930 onwards.
The Ju 52 was similar to the company’s previous Junkers W 33, although larger. Designed in 1930 at the Junkers works at Dessau, Germany, the aircraft’s featured an unusual corrugated duraluminium  metal skin, pioneered by Junkers during WW I, strengthened the whole structure.
The Ju 52 had a low cantilever wing, the midsection of which was built into the fuselage, forming its underside. It was formed around four pairs of circular cross-section duralumin spars with a corrugated surface that provided torsional stiffening. A narrow control surface, with its outer section functioning as the aileron, and the inner section functioning as a flap, ran along the whole trailing edge of each wing panel, well separated from it. The inner flap section lowered the stalling speed and the arrangement became known as the “Doppelflügel” ( “double wing”).
The outer sections of this operated differentially as ailerons, projecting slightly beyond the wingtips with control horns. The strutted horizontal stabilizer carried horn-balanced elevators which again projected and showed a significant gap between them and the stabilizer, which was adjustable in-flight. All stabilizer surfaces were corrugated.
The fuselage was of rectangular section with a domed decking, all covered with corrugated light alloy. There was a port side passenger door just aft of the wings, with windows stretching forward to the pilots’ cockpit. The main undercarriage was fixed and divided; some aircraft had wheel fairings, others not. There was a fixed tailskid, or a later tailwheel. Some aircraft were fitted with floats (Junkers Ju 52/3mg5e) or skis instead of the main wheels.
Originally powered by three Pratt & Whitney R-1690 “Hornet” radial engines, later production models mainly received 770 hp BW 132 engines, a license-built refinement of the Pratt & Whitney design. The two wing-mounted radial engines of the Ju 52/3m had half-chord cowlings and in planform view (from above/below) appeared to be splayed outwards, being mounted at an almost perpendicular angle to the tapered wing’s sweptback leading edge (in a similar fashion to the Mitsubishi G3M bomber (Allied code “Betty”) and Short “Sunderland” flying boat; the angled engines on the Ju 52 were intended to make it easier to maintain straight flight should an engine fail, while the others had different reasons). The three engines had either “Townend” ring or NACA cowlings to reduce drag from the engine cylinders, although a mixture of the two was most common, with deeper-chord NACA cowlings on the wing engines and a narrow “Townend” ring on the center engine, which was more difficult to fit a deeper NACA cowl onto, due to the widening fuselage behind the engine. Production Ju 52/3m aircraft flown by Luftwaffe usually used an air-start system to turn over their trio of radial engines, using a common compressed air supply that also operated the main wheels’ brakes.
In service with Lufthansa, the Junkers Ju 52/3m had proved to be an extremely reliable passenger airplane. Therefore, it was adopted by the Luftwaffe as a standard aircraft model and flew as a troop and cargo transport.. The Luftwaffe had 552 Ju 52/3ms in service at the beginning of WW II. Even though it was built in great and production continued until approximately the summer of 1944; when the war came to an end, there were still 100 to 200 aircraft available (Ref.: 24).