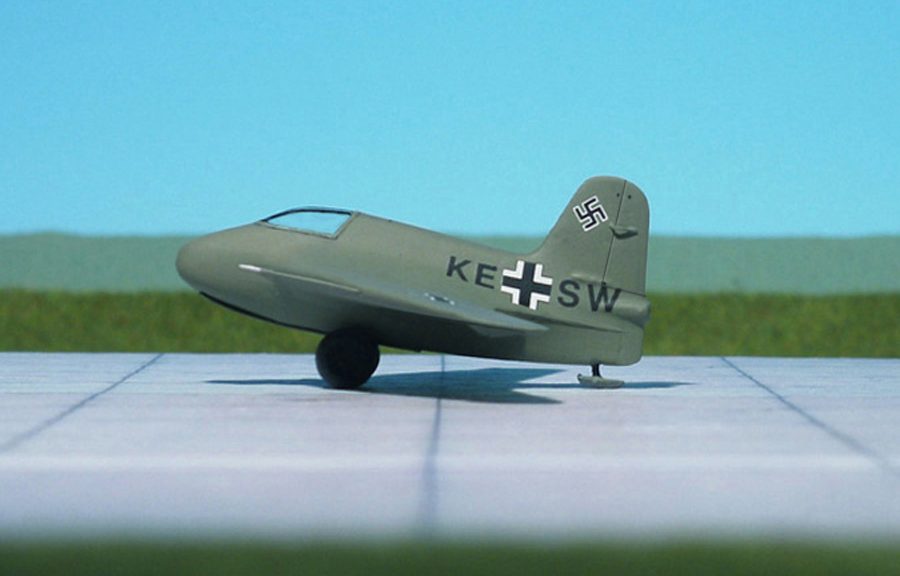 COMMENT: In early 1941, based on the success by the DFS 194, production of a prototype series, known as the Messerschmitt Me 163, began. Secrecy was such that the RLM’S “GL/C” airframe number, 8–163, was actually that of the earlier, pre-July 1938 Messerschmitt Bf 163. It was thought that intelligence services would conclude any reference to the number “163” would be for that earlier design. Five prototypes (V1 to V5) were ordered designated Messerschmitt Me 163A “Komet” (“Comet”).
In May 1941 the Messerschmitt Me 163A V4 was shipped to Peenemünde to receive the Walter HWK RII-203 engine. By 2 October 1941, the Me 163A V4, bearing the radio call sign letters, or Stammkennzeichen, “KE+SW”, set a new world speed record of 624.2 mph. Piloted by Heini Dittmar, the fully tanked up aircraft was towed to an altitude of 13,120 ft behind a Messerschmitt Me 110C. After casting-off from the tow-plane, the rocket engine was fired. At about Mach 0.84 compressibility effects resulted in a sudden loss of stability, and the Me 163A V4 went into a dive. Dittmar promptly cut the rocket motor, the aircraft decelerating rapidly and full control being restored. The aircraft was landed on skids with no apparent damage to the aircraft during the attempt.
During further flight testing, the superior gliding capability of the Me 163A proved detrimental to safe landing. As the now un-powered aircraft completed its final descent, it could rise back into the air with the slightest updraft. Since the approach was unpowered, there was no opportunity to make another landing pass. For production models, a set of landing flaps allowed somewhat more controlled landings. This issue remained a problem throughout the program. Nevertheless, the overall performance was tremendous, and plans were made to put the Messerschmitt Me 163 squadrons all over Germany in 40-kilometre rings (25 mi) around any potential target. Development of an operational version was given the highest priority.
Five prototype Me 163A V-series aircraft were built, adding to the original DFS 194 (V1), followed by eight pre-production examples designated as “Me 163 A-0”.

Note: Some postwar aviation history publications stated that the Messerschmitt Me 163A V3 (CD+IL) was thought to have set the record. The 1,004 km/h record figure would not be officially approached until the postwar period by the new British and American turbojet-powered aircraft. It was not surpassed (except by the later Me 163B V18 in 1944, but seriously damaged by the attempt) until the American Douglas D-558-I “Skystreak” turbojet-powered research aircraft did so on 20 August 1947 with no damage (Ref.: 24).