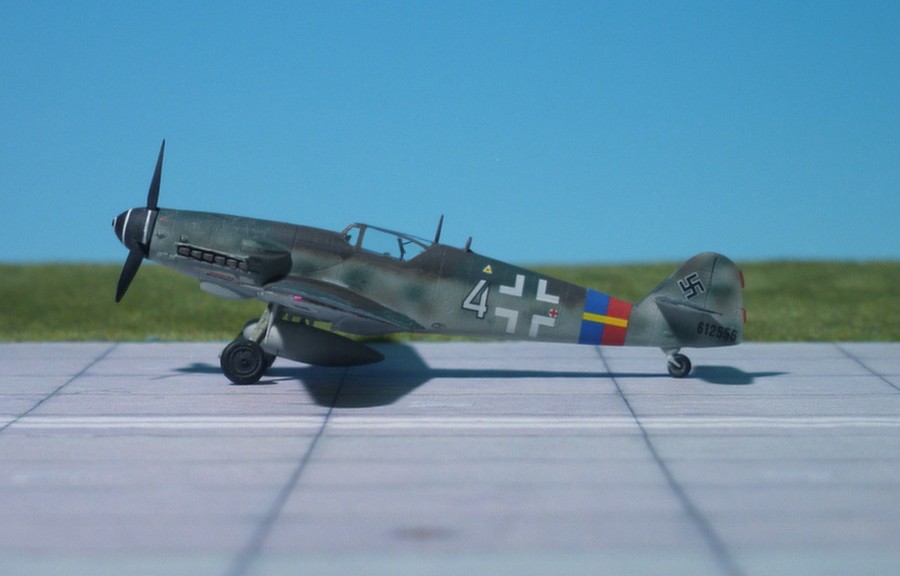 COMMENT: In the first half of the 1930’s Willy Messerschmitt, chief designer of the Bayrische Flugzeugwerke (BFW, Bavarian Aircraft Company) conceived several aircrafts that were trendsetting at that time: The Bf 108 Taifun, a sports and touring aircraft, the Bf 109 as a single-engine interceptor, and the Bf 110, a twin-engine heavy fighter. With begin of WWII the little BFW Company increased dramatically due to many orders given by the RLM (Reichsluftfahrtministerium, State Ministry of Aviation). So the BFM Company was reconstructed and renamed  Messerschmitt AG. By that erroneously the three aircraft were called Me 108, Me 109, and Me 110, respectively. And so did the Luftwaffe pilots as well as the allied opponents. The Me 109 was designed as an interceptor but later models were developed to fulfill multiple tasks, serving as fighter, bomber escorts, fighter-bomber, ground attack aircraft, night-fighter, reconnaissance aircraft, and even carrier-borne fighter. The Me 109 was in service from beginning of WWII until the dawn of the jet age at the end of the war. During that time the Me 109 was the backbone of the Luftwaffe (Fighter force), from end of 1941 supplemented by the Focke Wulf Fw 190. In total 33.984 Me 109 have been built in a great variety of subtypes: Me 109B, Me 109D, Me 109 E, Me 109F, Me 109G, Me 109H, and Me 109K. But even from theses subtypes many different variants were built. (Ref. 7.)