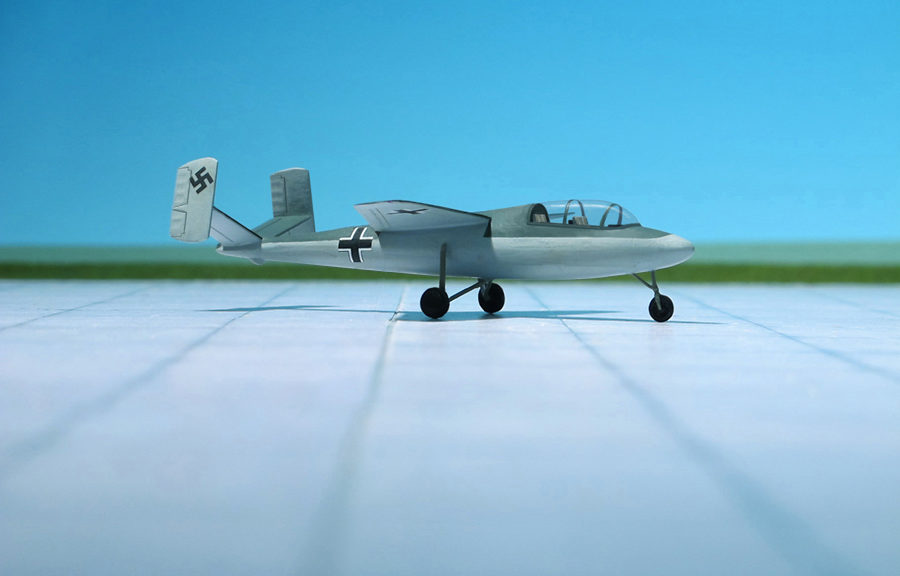 COMMENT: The Heinkel He 162 „Volksjäger“ (“People’s Fighter”), the name of a project of the „Jägernotprogramm“ (Emergency Fighter Program) design competition, was a German single-engine, jet-powered fighter aircraft fielded by the Luftwaffe in WW II. It was designed and built quickly and made primarily of wood as metals were in very short supply and prioritised for other aircraft. „Volksjäger“ was the RLM’s (Reich Air Ministry’s) official name for the government design program competition won by the He 162 design. Other names given to the plane include „Salamander“, which was the codename of its construction program, and „Spatz“ (“Sparrow”), which was the name given to the plane by Heinkel.
The „Volksjäger“ needed to be easy to fly. Some suggested even glider or student pilots should be able to fly the jet effectively in combat, and indeed had the Heinkel He 162 gone into full production, that is precisely what would have happened. After the war, Ernst Heinkel would say, “[The] unrealistic notion that this plane should be a ‘people’s fighter,’ in which the „Hitler Jugend“ (Hitler Youth), after a short training regimen with clipped-wing two-seater gliders like the DFS „Stummel Habicht“, could fly for the defense of Germany, displayed the unbalanced fanaticism of those days.”
The clipped-wingspan DFS „Habicht“ (Goshawk) models had varying wingspans of both 8 m or 6 m, and were used to prepare more experienced Luftwaffe pilots for the dangerous Messerschmitt Me 163B „Komet“ rocket fighter – the same sort of training approach would also be used for the „Hitler Youth“ aviators chosen to fly the jet-powered „Volksjäger“ design competition’s winning airframe design.
Besides the „Stummelhabicht“ a standard-fuselage length, unarmed BMW 003E-powered two-seat version (with the rear pilot’s seat planned to have a ventral access hatch to access the cockpit) and an unpowered two-seat glider version, designated the Heinkel He 162S („S“ for Schulen, Training establishment), were developed for training purposes. Only a small number were built, and even fewer delivered to the sole He 162 „Hitler Youth“ training unit to be activated in March 1945 at an airbase at Sagan (now Poland). The unit was in the process of formation when the war ended, and did not begin any training; it is doubtful that more than one or two He 162S gliders ever took to the air (Ref.: 24).