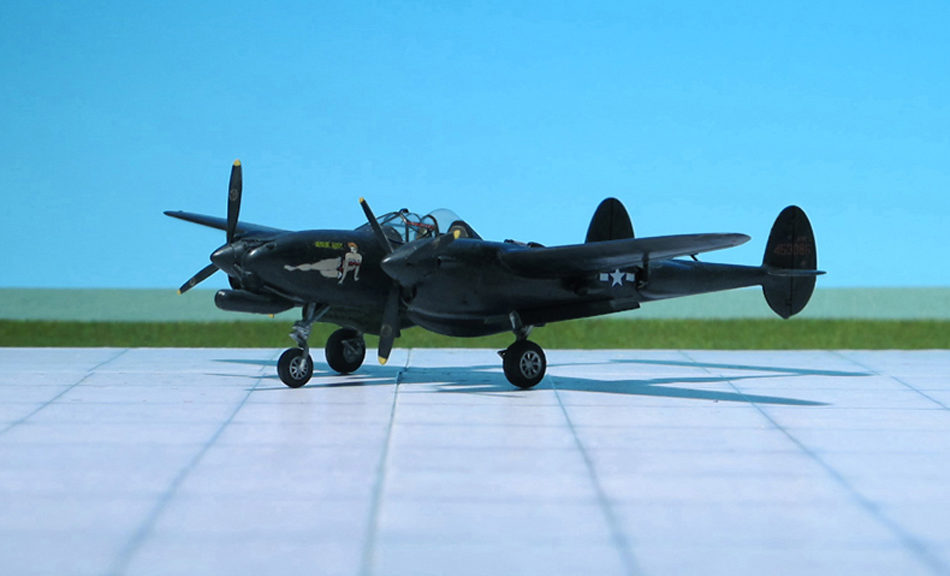 COMMENT: The Lockheed P-38 „Lightning“ is a World War II–era American piston-engined fighter aircraft. Developed for the United Stated Army Air Corps, the P-38 had distinctive twin booms and a central nacelle containing the cockpit and armament. Allied propaganda claimed it had been nicknamed the fork-tailed devil (German:„Gabelschwanz-Teufel“) by the Luftwaffe and „two planes, one pilot” by the Japanese. The Lockheed P-38 Lightning was used for aerial combat of every sort including interception, dive bombing, level bombing, ground attack, night fighting, photo reconnaissance, radar and visual pathfinding for bombers and evacuation missions, and extensively as a long-range escort fighter when equipped with drop tanks under its wings.
Adaption oft he Lightning as a night fighter, to fill the gap in the USAAF inventory caused by late delivery oft he Northrop P-61 „Black Widow“, accounted fort the last-designated variant oft he Lockheed twin, the P-38M, although the use of Lightnings in nocturnal role actually originated at squadron level rather than as a factory-designed innovation. Detachments oft he 6th Fighter Squadron flying Douglas P-70s in New Guinea and at Guadalcanal, both operated P-38Gs in this role, and the New Guinea detachment actually converted two Lightnings to two-seatres, carrying SCR-540 radar in a drop tank; the unit was, however, disbanded before these aircraft could be tested in combat. Unmodified P-38Gs and P-38Js were used as night fighters in New Guinea and on Guadalcanal with a few successful interceptions recorded.Two single seat P-38Js fitted with APS-4 radar were used with a degeree of sucess by the 547th Night Fighter Squadron operating in the Philippines in late 1944/early 1945.
While these operational innovations had been going on, a P-38J had been adapted at Wright Field to serve as a test-bed for AN/APS-4 radar, installed in the first instance in a pod under the fuselage behind the nose wheel. As it was struck by cartridges ejected when the nose gund were fired, this pod was later moved to an underwing position, outboard oft the starboard engine. Several similar radar conversions of P-38Js, including „piggy back“ two seaters were than made fort the 481st NF Operational Training group, which conducted field trials, and when the USAAF then contracted with Lockheed, in late 1944, to convert a P-38L as a night fighter, carrying a radar operator in a second cockpit behind and above the pilot, and an AN/APS-6 radar in a long pod under the nose ahead oft he nosewheel doors. The headroom in the rear cockpit was limited, requiring radar operators who were preferably short in stature.
The first flight with all modifications in place was made on February 1945, and although only six flights were made before this aircraft was destroyed, the USAAF then ordered 75 similar P-38L conversions, to be redisignated Lockheed P-38M „Night Lightning“. Testing oft he first P-38M began in July 1945, and five of these aircraft arrived at a training establishment at Hammer Field, Ca, in the same month. Found to have a better overall performance than the Northrop P-61B „Black Widow“ but to suffer some operational limitations, the P-38M saw some combat duty in the Pacific towards the end of WW II but none engaged in combat (Ref.: 9, 24).