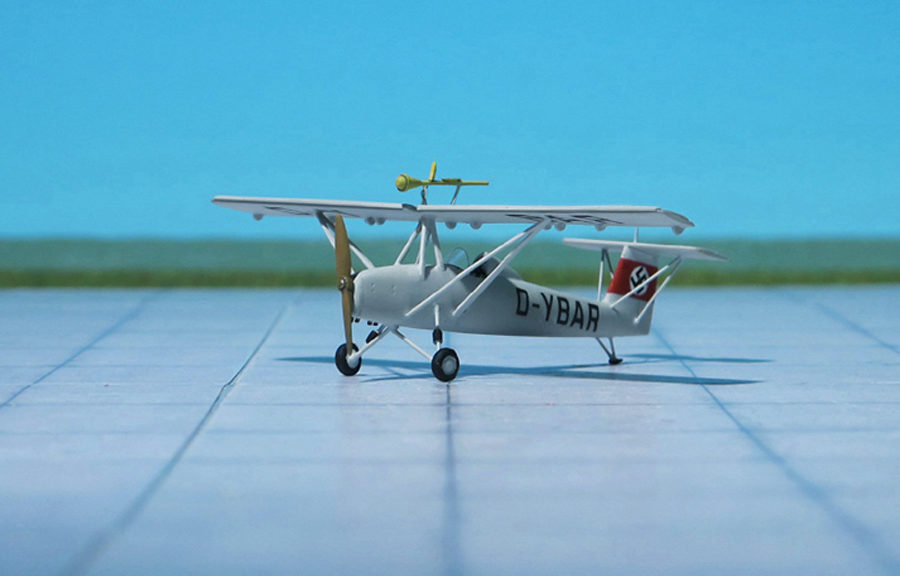 COMMENT: The Braunschweig LF-1 “Zaunkönig”, (“Wren”, LF = Langsames Flugzeug, Slow aircraft), is a Short Take-Off and Landing single-seat light aircraft designed in 1939 by Hermann Winter  and some of his students from the Technische Universität Braunschweig (Technical University of Brunswick), Lower Saxony, Germany, as a fool-proof trainer for novice student pilots to experience solo flight. H. Winter was a former chief engineer at the Bulgarian company DAR (Drzhavnata Aeroplanna Rabotilnitsa, where he created a line of aircraft and gliders for the Bulgarian Army.
The LF-1 is a parasol wing monoplane with a high set tail-plane, powered by a Zündapp Z 9-092 engine delivering 50 hp, able to operate from a 330 ft airstrip. The two-piece wings are set at 16° dihedral and are supported by a pair of V-cabane struts and V-struts either side from approximately half-span to the lower center fuselage. Full span leading edge slats extend automatically and full span trailing edge flaps / drooping ailerons can be extended manually by the pilot. The fixed tailwheel undercarriage attaches to the fuselage with long struts and oleo pneumatic shock absorbers.
It was a proof-of-concept design for a ‘fool-proof’ trainer intended for novice pilots with only one hour of ground instruction, the hour being reduced to five-minutes for those who had already flown gliders, and was intended to be impossible to either stall or spin.
The first prototype, the LF-1 V1, was built in 1940 and made its maiden flight, piloted by Winter himself, in December 1940. Test flights stopped in November 1942 after part of the wing ruptured causing the aircraft to crash. In 1943 a second prototype, the V2, was built, receiving the civil registration D-YBAR.
In early 1945 the aircraft was tested for military applications and was once even armed with a Panzerfaust 100 recoilless anti-tank weapon (Bazooka).
At the end of WW II the LF-1 was taken to the Royal Aircraft Establishment (RAE) at Farnborough for slow flying tests; given the British serial VX190, where amongst others, it was flown by Eric “Winkle” Brown CO Aero Flight, the aircraft also being soloed by the then-head of the RAE Aerodynamics Section, Handel Davies, after half an hour of ground instruction, and whose only previous piloting experience was as a pupil in a dual-control Miles Magister.
Encouraged by the positive British reviews Hermann Winter decided to build three more LF-1 aircraft. The construction started in 1954 and it was the first new aircraft in Germany after the war to receive a certificate by the Luftfahrt-Bundesamt (LBA) in Braunschweig (Ref.: 24).