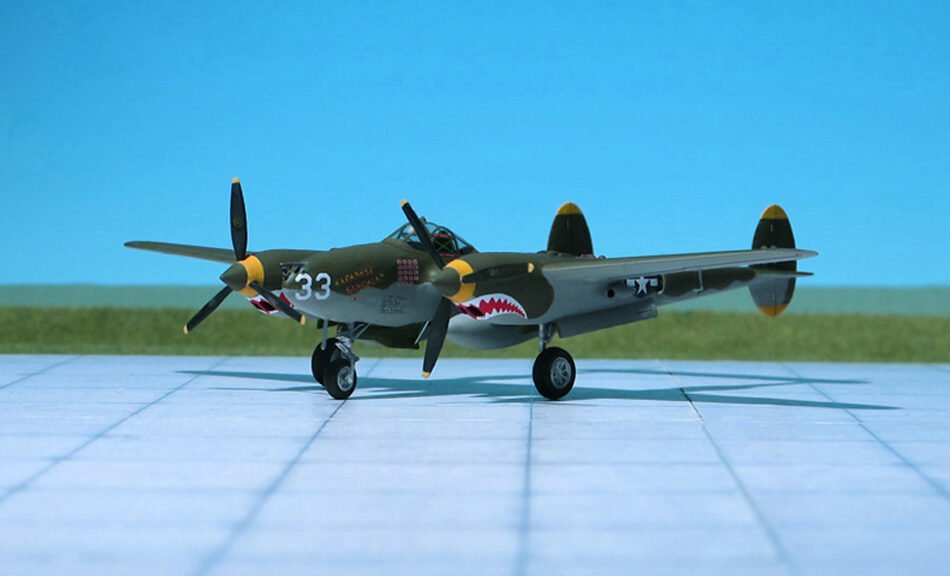 COMMENT: The Lockheed P-38 Lightning was an American piston-engined fighter aircraft of WW II. Developed for the United States Army Ai Corps, the P-38 had distinctive twin booms and a central nacelle containing the cockpit and armament. Allied propaganda claimed it had been nicknamed the fork-tailed devil („Gabelschwanz-Teufel“) by the Luftwaffe and “two planes, one pilot” by the Japanese. Along with its use as a general fighter, the P-38 was utilized in various aerial combat roles including as a highly effective fighter-bomber, a night-fighter, and as a long-range escort fighter when equipped with drop tanks. The P-38 was also used as a bomber-pathfinder, guiding streams of medium and heavy bomber; or even other P-38s, equipped with bombs, to their targets. Used in the aerial reconnaissance role, the P-38 would account for 90 percent of the aerial film captured over Europe.
The P-38 was used most successfully in the Pacific Theater of Operations (PTO) and was the primary long-range fighter of Unites States Army Air Forces until the introduction of large numbers of North American P-51D „Mustang“ toward the end of the war.
Lockheed designed the Model 22 in response to a February 1937 specification from the United States Arma Air Corps (USAAC). Circular Proposal X-608 was a set of aircraft performance goals for a twin-engine, high-altitude aircraft having the tactical mission of interception and attack of hostile aircraft at high altitude.  The Lockheed design team chose twin booms to accommodate the tail assembly, twin engines, and turbo-superchargers, with a central nacelle for the pilot and armament.
The Lockheed design incorporated tricycle undercarriage and a bubble canopy, and featured two 1,000 hp turbosupercharged 12-cylinder Allison V-1710 engines fitted with counter rotating propellers to eliminate the effect of engine torque, with the turbochargers positioned behind the engines, the exhaust side of the units exposed along the dorsal surfaces of the booms. The aircraft was the first American fighter to make extensive use of stainless steel and smooth, flush-riveted butt-jointed aluminum skin panels It was also the first military airplane to fly faster than 400 mph in level flight.
Lockheed won the competition on June 1937 with its Model 22 and was contracted to build a prototype officially designated XP-38.  Construction began in July 1938, and the XP-38 first flew on 27 January 1939. After speed testing the Air Corps ordered 13 YP-38s on April 1939, these few “hand made” YP-38’s were used as trainers and test aircraft.
Delivered and accepted production variants began with the P-38D model but the first combat-capable Lightning, as the aircraft was officially named by the USAAC by adopting the British service name, was the P-38E and its photo-reconnaissance variant the F-4
The first P-38E rolled out of the factory in October 1941. Because of the versatility, redundant engines, and especially high speed and high altitude characteristics of the aircraft, as with later variants over a hundred P-38Es were completed in the factory or converted in the field to a photoreconnaissance variant, the F-4, in which the guns were replaced by four cameras. Most of these early reconnaissance Lightnings were retained stateside for training, but the F-4 was the first Lightning to be used in action in April 1942.
After 210 P-38Es were built, they were followed, starting in February 1942, by the P-38F, the first truly operational Lightning. It incorporated racks inboard of the engines for fuel tanks or a total of 910 kg of bombs. 527 machines of this subtype were buit, including several variants. Lightnings of this type took part in their first large-scale operations during the North-African campaign, in November 1942, where mixed success was encountered. The twin engines restricted manoeuverability to some extent and it was unique among fightersof WW II in employing a wheel control instead of a conventional stick, a feature which may also have resulted in reduced ease of manoeuvre. Nevertheless, it proved an effective bomber destoyer and had a sensational zoom climb that could rarely be matched.
The Lockheed P-38F Lightning had also entered service in the Pacific area. Technical difficulties associated with intercooler operations in tropical conditions prevented the Lightning from entering service until the end of 1942, however, the first major engagement with Japanese aircraft occuring on December, when the 39th Fighter Squadron claimed 15 destroyed without loss (the model shown here is a P-38F of the 39th Fighter Squadron, 35th Fighter Group).
During production a continous series of improvements were being developed by Lockheed, some of which remained experimental but others being adopted for production. Among the most important in the latter category were long-range drop tanks and manoeuvring flaps. In early 1942, all P-38 carried the same long-range 75-US gal drop tanks as the Bell P-39 Aircobra and Curtiss P-40 Warhawk, one each side between the fuselage and nacelles. But Lockheed soon developed its own 150-US gal tank, and eventually 300-US gal versions, of laminar flow design. Stressing the wing section two such tanks could be carried by all variants  from the P-38F onwards. To demonstrate the capability oft he Lightning with drop tanks, a P-38F was used late in 1942, to make an endurance flight lasting over 13 hrs and covering 4.677 km, with enough fuel remaining for more than 161 km. Thus, Lightning’s ability to fly long ranges, carrying two drop tanks, now proved especially useful and the P-38 became the most-preferred fighter type operating in the Pacific area.
After production of 2,410 P-38F, -G and –H and corresponding reconnaissance variants the production switched over to the most built P-38J and –L Lightnings (Ref.: 3, 9, 24).