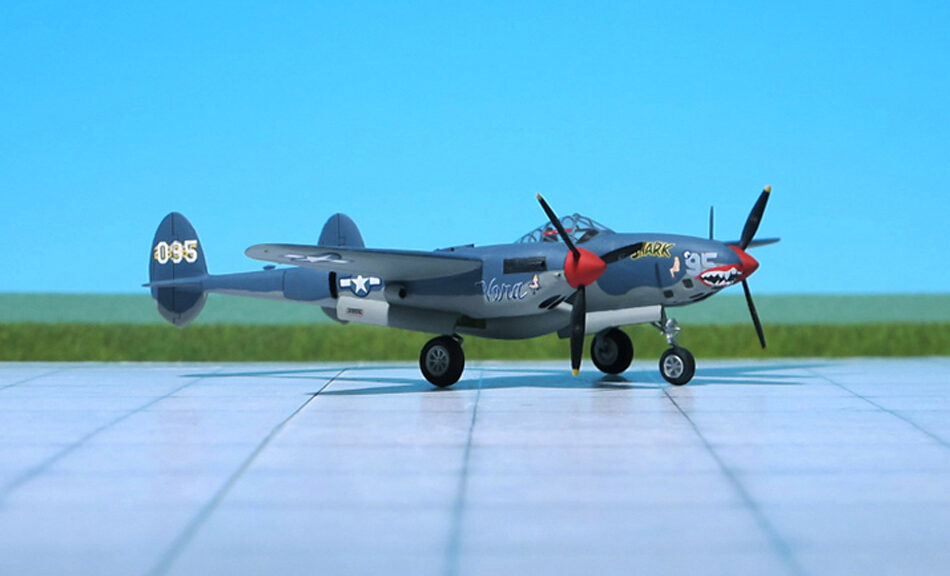 COMMENT: The Lockheed P-38 Lightning was an American single-seat, piston-engined fighter aircraft that was used during World War II. Developed for the United States Army Air Corps, the P-38 had distinctive twin booms and a central nacell containing the cockpit and armament. Along with its use as a general fighter, the P-38 was utilized in various aerial combat roles including as a highly effective fighter-bomber, a night-fighter and as a long-range escort fighter when equipped with drop tanks. The P-38 was also used as a bomber-pathfinder, guiding streams of medium and heavy bombers; or even other P-38s, equipped with bombs, to their targets. Used in the aerial reconnaissance role, the P-38 accounted for 90 percent of the aerial film captured over Europe.
Delivered and accepted Lightning production variants began with the P-38D model. The few “hand made” YP-38s initially contracted were used as trainers and test aircraft. There were no Bs or Cs delivered to the government as the USAAF allocated the ‘D’ suffix to all aircraft with self-sealing fuel tanks and armor. Many secondary but still initial teething tests were conducted using the earliest D variants.
The first combat-capable Lightning was the P-38E Lightning and its photo-recon variant the F-4, which featured improved instruments, electrical, and hydraulic systems. Part-way through production, the older Hamilton Standard Hydromatic hollow steel propellers were replaced by new Curiss Electric duraluminium propellers.
The first P-38E rolled out of the factory in October 1941and promptly filled the news wires of the world. Because of the versatility, redundant engines, and especially high speed and high altitude characteristics of the aircraft, as with later variants over a hundred P-38Es were completed in the factory.
After 210 P-38Es were built, they were followed, starting in February 1942, by the Lockheed P-38F, which incorporated racks inboard of the engines for fuel tanks or a total of 910 kg of bombs. Early variants did not enjoy a high reputation for maneuverability, though they could be agile at low altitudes if flown by a capable pilot, using the P-38’s forgiving stall characteristics to their best advantage. From the P-38F-15 model onwards, a “combat maneuver” setting was added to the P-38’s Fowler flaps which allowed the P-38 to out-turn many contemporary single-engined fighters at the cost of some added drag. However, early variants were hampered by high aileron control forces and a low initial rate of roll, and all such features required a pilot to gain experience with the aircraft, which in part was an additional reason Lockheed sent its representative to England, and later to the Pacific Theater.
In March 1942 the first deliveries of the photoreconnaissance version Lockheed F-4 were made. Otherwise similar to the P-38E from which it was converted, the F-4 had the nose armament supplanted by four K-17 cameras for reconnaissance duties. A drift sight and auto pilot were standart in the photographic Lightnings, which were painted in cerulean blue. More than 100 F-4 reconnaissance aircraft based on the P-38E and 20 F-4A based on the P-38F were built.
The aircraft shown here belonged to the 12th Photo Reconnaissance Group, 15th Air Force, Mediterranean Theater  (Ref.: 24).