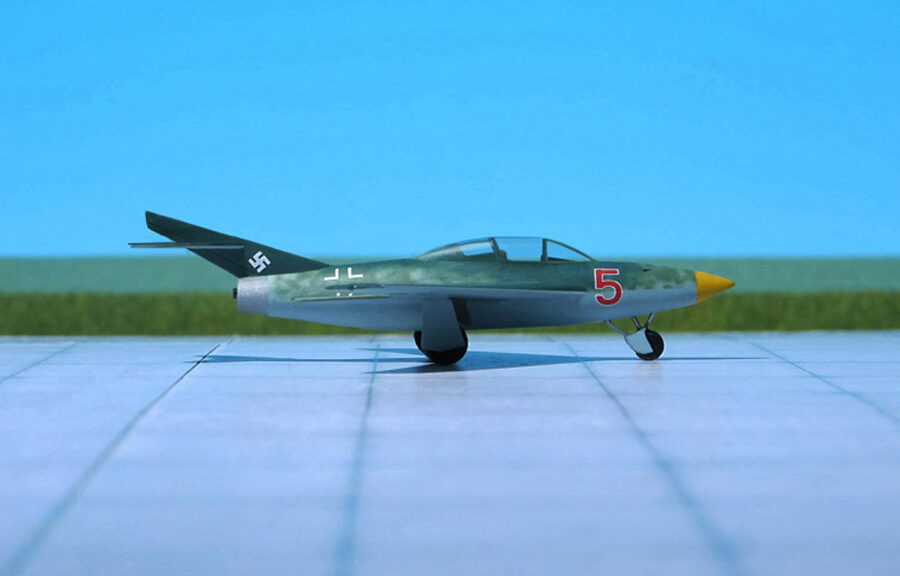 COMMENT: The end of WW II saw a great amount of  secret project documents burned, captured or left to blow around empty hangars. Some companies documents were almost completely lost, others were scattered. After the war some of these seemingly reappeared but most likely many of these projects are imaginations. Some were relatively conventional, others were futuristic, but it is unknown whether these designs are from the period 1940/41 or from the time at the end of the WW II.
This is true for instance for Messerschmitt’s “Animal Names” types. These were a single-turbojet  midget fighter “Libelle”  (Dragonfly) and two designs of the “Wespe I” and “Wespe II” (Wasp) light fighters, a twin-engine fighter Messerschmitt Schwalbe (Swallow),  a bomber-transporter “Wildgans” (Brant) and two versions of a heavy ground-attacker “Zerstörer I” and “Zerstörer II” (Destroyer).
Both Messerschmitt “Wespe I” and “Wespe II” had swept-back wings, were to be powered by a single turbojet-engine and had a tricycle landing-gear. From this point of view these projects could be dated to the end of the war.
In contrary, unusual for these Messerschmitt project drawings is that none of the dotted-outline turbojets in each of the drawings matches with the contours of any turbojets that are under development or production by BMW, Daimler-Benz, Heinkel-Hirth and Junkers, nor do the thrust figures quoted for them correspond to the known turbojets variants. Gas turbine development in Germany was concerned from the very beginning with the axial-flow type, save for the radial-flow turbojets developed by Dr. ing. von Ohain. This leads to the conclusion that at beginning of the war Messerschmitt possessed no documentation on turbojet development or installation plans hypothesizing that all these “Animal Name” projects could also be dated to the early 1940’s.
In conclusion, perhaps and more likely are these designs the product more of fantasy than reality.