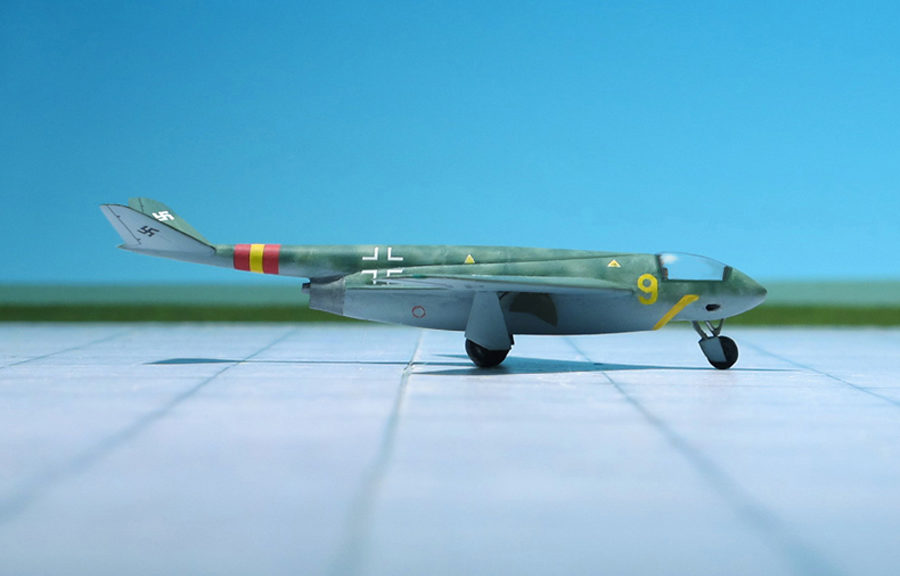 COMMENT: This late WW II Messerschmitt „Projekt Wespe” (Wasp) is mostly unknown, and information on it is incomplete. Two seperate fuselages were designed for the „Wespe”:
Design Messerschmitt „Projekt Wespe I” had the cockpit located midway along the fuselage, and the single turbojet engine was located at the rear and was fed by a long air duct. A long tapering single fin and rudder was chosen, with the tail planes located about halfway up.
Design Messerschmitt „Projekt Wespe II” had the cockpit located far forward on the fuselage, and the single He S 011 turbojet was mounted mid fuselage. It was fed by an air duct which wrapped under the forward fuselage, and exhausted below a tail boom with a V- Tail unit.
Both designs used a tricycle landing gear arrangement, with the main gear retracting inwards from the wing and the front gear retracting forwards. No armament was specified, but at this stage in the war two MK 108 30mm cannon would probably have been fitted. Priority for both designs was the use of non-strategic material as much as possible, reduction of time for maintenance and adequate flying characteristics (Ref.: 17).