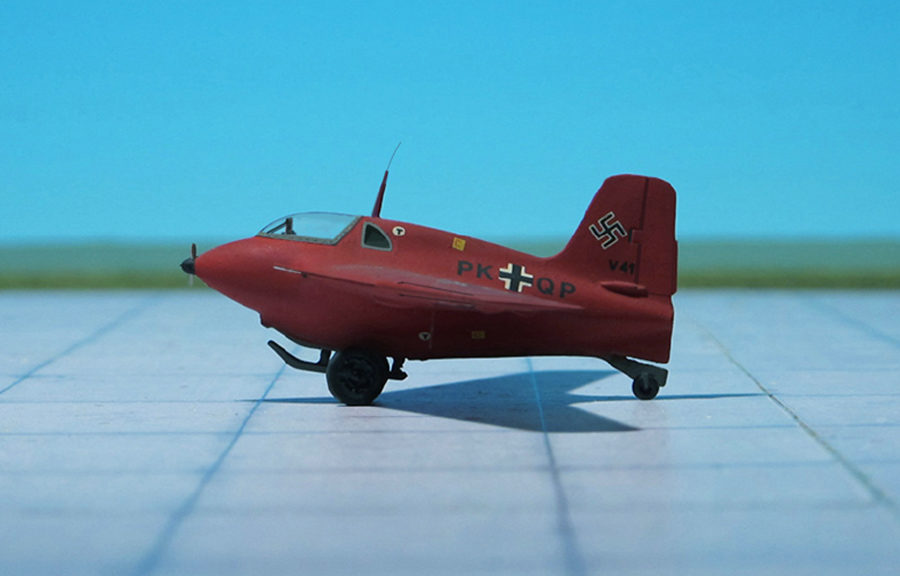 PERFORMANCE: 559 mph at all altitudes

COMMENT: The Messerschmitt Me 163 “Komet” (“Comet”) was a German rocket-powered interceptor aircraft. Designed by A. Lippisch, it was the only rocket-powered fighter aircraft ever to have been operational and the first piloted aircraft of any type to exceed 1000 km/h (621 mph) in level flight. Its performance and aspects of its design were unprecedented. The Messerschmitt Me 163 “Komet” was among the most technically advanced and inherently dangerous military aircraft ever to see service. The radical ‘tailless’ design was developed by Dr Alexander Lippisch as the DFS 194 at the Deutsche Forschungsanstalt für Segelflug, (German Research Institute for Sailplanes) at Darmstadt in the 1930s. In January 1939, project work on the DFS 194 was transferred to Messerschmitt AG at Augsburg responsible for fitting a rocket motor. Lippisch also moved to Messerschmitt AG to head the development project team. The rocket-powered sailplane DFS 194 made its first flight on August 1940 what was very successful. Although Messerschmitt was not impressed by the concept of a rocket-powered interceptor, Lippisch and his team continued work on the project. Officially designated Messerschmitt Me 163 the aircraft was first flown under rocket power in 1940 becoming the first aircraft to exceed 1000 km/h, experiencing control problems on the edge of the sound barrier.
Five prototype Messerschmitt Me 163A V-series aircraft were built, adding to the original DFS 194 (V1), followed by eight pre-production examples designated as Me 163 A-0. These aircraft were intensively tested by the Luftwaffe and although its extraordinary acceleration, climbing characteristics and speed inspired the authorities the handling of this tiny aircraft especially during take-off and landing showed tremendous problems. The rocket engine gave power for only a few minutes and the rest of the flight had to be continued as a glider.
Five prototypes and eight pre-production examples were followed by 30 completely redesigned production aircraft Messerschmitt Me 163B-0. These aircraft were armed with two 20 mm MG 151/20 cannon and some of these were allocated to “Erprobungskommando16” (EKdo 16) (“Testing-command 16”) that was formed March 1943 in Peenemünde-West, as a test unit for the rocket fighter, and later based at the Luftwaffe airfield in Bad Zwischenahn for a considerable period of time. This EKdo 16 had some of the aircraft painted completely in red and was the first Luftwaffe unit to perform a combat mission.
The performance of the Me 163 far exceeded that of contemporary piston engine fighters. At a speed of over 200 mph the aircraft would take off, in a so-called “Scharfer Start” (“sharp start”, “sharp take-off”) from the ground, from its two-wheeled dolly. The aircraft would be kept at level flight at low altitude until the best climbing speed of around 420 mph was reached, at which point it would jettison the dolly, retract its extendable landing skid and then pull up into a 70° angle of climb, to a bomber’s altitude. It could go higher if required, reaching 39,000 ft in an unheard-of three minutes. Once there, it would level off and quickly accelerate to around 550 mph or faster, which no Allied fighter could match. Flight endurance under power was just eight minutes after which the aircraft became a glider, and the time available to attack enemy aircraft using  two 20mm cannons was very limited. Once the rocket’s fuel supply was exhausted the Me 163B “Komet” was an easy target for fighter aircraft, particularly during the landing phase (Ref.: 24).