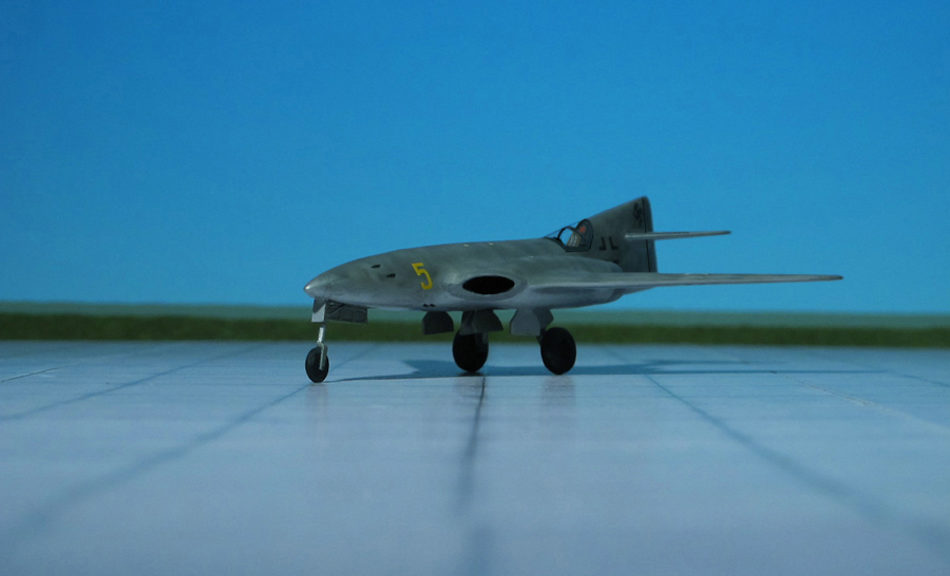 COMMENT: In early 1941 several high speed versions of the basic Messerschmitt Me 262 were designed on the drawing board. The first of these “Hochgeschwindigkeitsjäger” (HG), (High-speed fighter) was the Messerschmitt Me 262 V9, unofficially called HG I. This aircraft featured modified wing leading edges of the inner wing section, swept angles of stabilizers, and a “Rennkabine” (Racing canopy), shallow, low-drag cockpit canopy and windscreen with low profile.
Other two projects were created following this way: The Me 262 HG II called for an outboard wing of increased chord and an improved air intake and engine installation, and finally  the Me 262 HG III, which was the final stage of development. It required more radical modifications, as a new 45 degree swept wing with engines housed in the wing roots. Three variants of the Me 262 HG III are known correspond to the original layout.
Entwurf 1” (Concept 1) had a the original tail plane of the Me 262, “Entwurf 2” (Concept 2) had a butterfly-type tail plane, and “Entwurf 3” (Concept 3) together with various subtypes was considerably altered in the fuselage area, where the cockpit was relocated at the rear and formed a part of the empennage group. The swept back stabilizers were located behind the cockpit. This Messerschmitt Me 262 HG III/ Concept 3 attained a very high state of fighter technology, which in the post-war period was the only realized abroad after a passage of several years.