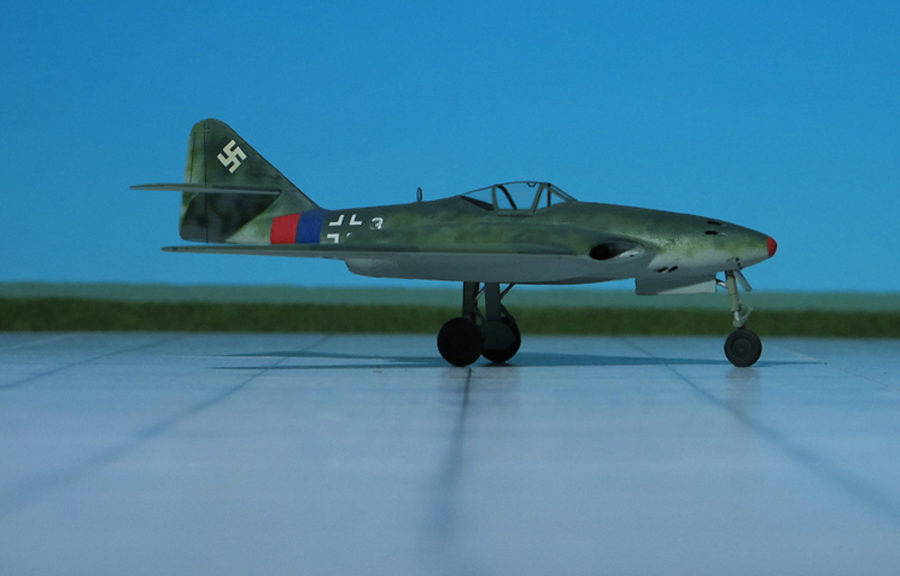 COMMENT: The final layout of the Messerschmitt Me 262 “Schwalbe” (“Swallow”) did not come up to all expectations of perfectionist Willy Messerschmitt. He argued that at least the concept of the new revolutionary aircraft is a result of many compromise and need to be improved. One goal is the high speed that can be reached by a turbojet driven aircraft.
Already in 1939 when the first design studies began what later became the Messerschmitt Me 262 Willy Messerschmitt proposed the installation of the turbojet engines into the wing roots in order to reduce drag and save weight. But at that time the plan failed due to the rapid changing dimensions of the first “Sondertriebwerke” (“Exceptional power plants”) as the new turbojet engines are called..
Yet another possibility to reduce drag in high-speed flight was the introduction of swept-back wings. In 1935 Prof. Busemann, an aeronautical research scientist at the aerodynamic institute of the University of Göttingen, discovered the benefits of the swept wing for aircraft at high speeds. He presented a paper on the topic at the Volta Conference at Rome in 1935. The paper concerned supersonic flow only. At the time of his proposal, flight much beyond 300 miles per hour had not been achieved and it was considered an academic curiosity. Nevertheless, he continued working with the concept, and by the end of the year had demonstrated similar benefits in the transonic region as well.
By early 1940 the first precise research findings on swept back wings were available to the German aircraft industry and Messerschmitt proposed in April 1941 to fit up the piston engine driven Messerschmitt Me 262 V1 with a 35 degree swept back wing. Nevertheless, at that time priority was given to the mass-production of the Messerschmitt Me 262 “Schwalbe” (“Swallow”). But with the introduction of this phenomenal aircraft the influence of critical Mach-number (“compressibility”) on subsonic speed became noticeable. In early 1944 research work on development of a high-speed variant of the Messerschmitt Me 262 was done again in three steps as so called “Hoch-Geschwindigkeitsjäger” , suffix “HG” (“High-speed fighter”):

Messerschmitt Me 262 HG II
A new wing with 35 degree sweep was installed, the engine nacelle was improved, a shallow, low-drag canopy and a butterfly tail-plane was provided.