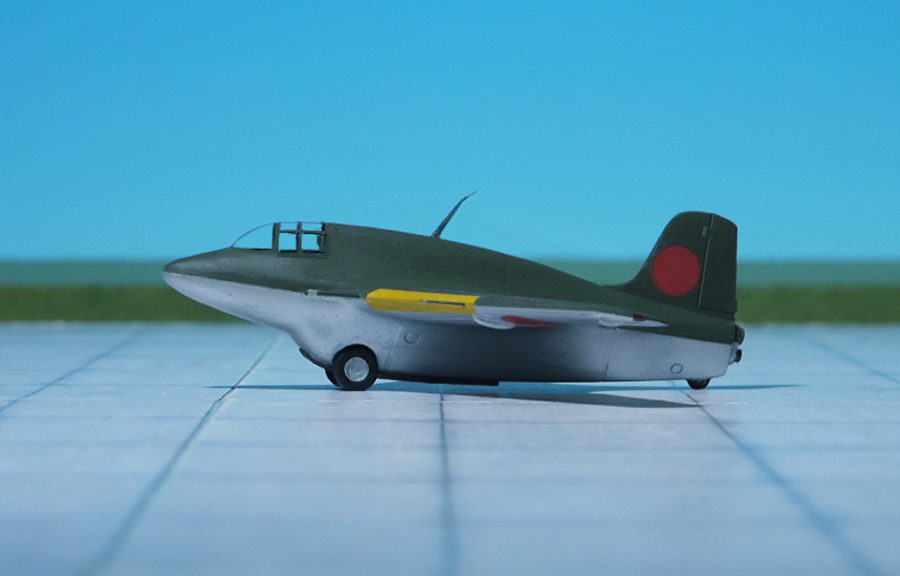 COMMENT: The Mitsubishi Ki-202 “Shūsui-Kai” (translated as “Sharp Sword, improved”) was a direct development of the Mitsubishi Ki-200 “Shusui” rocket-powered interceptor aircraft. None were produced before Japan’s surrender that ended WW II.
In a split from the development of the IJ Navy Mitsubishi J8M “Shusui” and Army’s Mitsubishi Ki-200 “Shusui”, the IJ Army instructed Rikugun Kokugijitsu Kenkyujo (Army Aerotechnical Research Institute) to develop a new design originally based  on the German Messerschmitt Me 163 “Komet” (“Comet”), built in Japan as a joint Navy-Army venture.
A fundamental shortcoming of the Messerschmitt Me 163, and all other aircraft based on it, was extremely limited endurance, typically only a few minutes. The Imperial Japanese Navy proposed to improve the endurance of the J8M1 by producing a version with only one cannon, thereby saving weight and space for more fuel, designated J8M2. The Imperial Japanese Army, on the other hand, opted to keep both cannon, but enlarge the airframe to accommodate larger tanks, resulting in the Mitsubishi Ki-202 “Shusui-Kai”, which was to have been the definitive Army version of the fighter. Power was to be supplied by a 2,000 kg thrust delivering Mitsubishi Toku Ro.3 (KR20) rocket motor. An additional rocket engine with reduced thrust was used for cruising speed. Undercarriage was to have been a sprung skid and tail-wheel.
Similar development was done in Germany. The Messerschmitt Me 163 variant Messerschmitt Me 163C had a lengthened fuselage to accommodate larger fuel tanks while the Messerschmitt Me 263 was a complete new design with increased flight endurance (Ref.: 24).