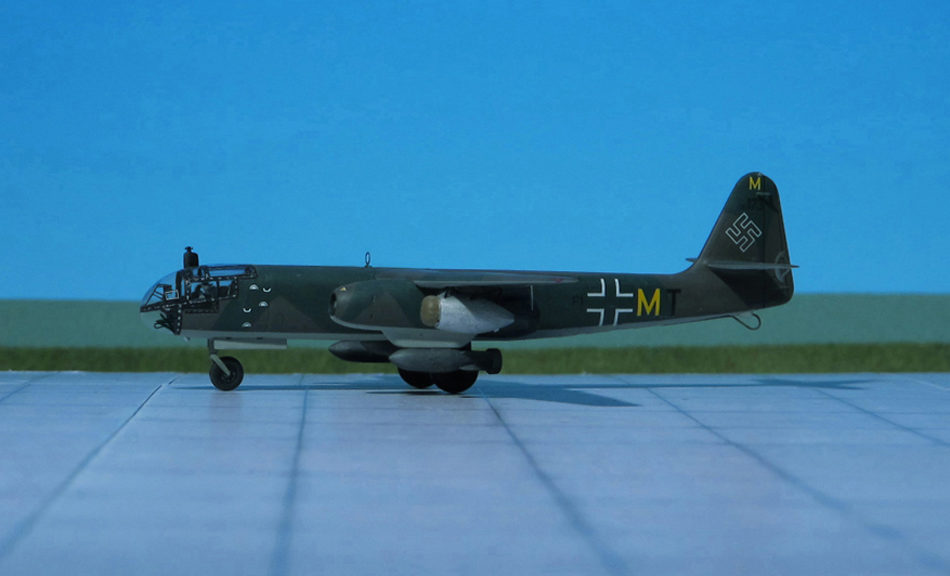 COMMENT: In late 1940, the Reichsluftfahrtministerium (RLM, Reich Air Ministry), offered a tender for a jet-powered high-speed reconnaissance aircraft with a range of 1,340 mi. Arado was the only company to respond, offering their E.370 project, a high-wing conventional-looking design with a Junkers Jumo 004 tubojet engine under each wing.
Arado estimated a maximum speed of 480 mph at 20,000 ft, an operating altitude of 36,000 ft and a range of 1,240 mi. The range was short of the RLM request, but they liked the design and ordered two prototypes as the Arado Ar 234. These were largely complete before the end of 1941, but the Jumo 004 engines were not ready, and would not be ready until February 1943. When they did arrive they were considered unreliable by Junkers for in-flight use and were cleared for static and taxi tests only. Flight-qualified engines were finally delivered, and the first prototype, the Ar 234 V1 made its first flight on July 1943 at Rheine Airfield.
By September 1943, four prototypes were flying and four more prototypes under construction. The sixth and eighth aircraft of the series were powered with four BMW 003 turbojet engines instead of two Jumo 004s, the sixth having four engines housed in individual nacelles and the eighth flown with two pairs of BMW 003s installed within “twinned” nacelles underneath either wing. These were the first four-engine jet aircraft to fly.
The projected weight for the aircraft was approximately 8 tonnes. To reduce the weight of the aircraft and maximize the internal fuel the eight prototype aircraft were fitted with the original arrangement of trolley-and-skid landing gear, intended for the planned operational, but never-produced Arado Ar 234A version.
Arado did not use the typical retractable landing gear. Instead, the aircraft was to take off from a jettisonable three-wheeled, tricycle gear-style trolley and land on three retractable skids, one under the central section of the fuselage, and one under each engine nacelle.
The RLM had already seen the promise of the design and in July 1943 had asked Arado to supply two prototypes of a “Schnellbomber” (“Fast bomber”) version as the Arado Ar 234B. Since the original skid-equipped Ar 234A’s fuselage design was very slender and filled with fuel tanks, there was no room for an internal bomb bay and the bombload had to be carried on external racks.
Since the cockpit was directly in front of the fuselage, the pilot had no direct view to the rear, so the guns were aimed through a periscope, derived from the type used on German World War II tanks, mounted on the cockpit roof. The Ar 234B version was modified to have fully retractable tricycle landing gear, with the mid-fuselage very slightly widened to accommodate the forward-retracting main gear units, the nose gear retracting rearwards. The first twin-Jumo 004 powered prototype Ar 234B (V 7) flew on 10 March 1944 for the first time and made history on 2 August 1944 as the first jet aircraft ever to fly a reconnaissance mission.
Production B-series aircraft  were slightly wider at mid-fuselage to house the main landing gear, with a central fuel tank present (the middle one of a trio of fuel tanks) in the mid-fuselage location forward tank, central and an aft. Under tests with maximum bombload consisting of three SC 500 bomb, the Ar 234 V9 aircraft could reach 418 mph at 16,000 ft. This was still better than any bomber the Luftwaffe had at the time, and made it the only bomber with any hope of surviving the massive Allied air forces. The normal bombload consisted of two 500 kg bombs suspended from the engines or one large 1,000 kg bomb semi-recessed in the underside of the fuselage with maximum bombload being 1,500 kg. In case the full bomb load was to be deployed on an Ar 234B for an operational sortie, fuel had to be reduced and two Walter HWK 109-500A-1 “Starthilfe” (Take-off assistance) liquid fuel jettisonable JATO rocket pods delivering 500kp thrust each were fixed under each wing.
Production lines were already being set up, and 20 Arado Ar 234B-0 pre-production aircraft were delivered by the end of June 1943. Later production was slow, as the Arado plants were given the simultaneous tasks of producing aircraft from other bombed-out factories hit during the USAAF’s “Big Week”, and the ongoing license-building and nascent phasing-out of Heinkel’s heavy He 177A bomber, even as the Arado firm was intended to be the sole subcontractor for the Heinkel He 177B (He 277) series strategic bomber, meant to start construction at Arado as early as October 1944. Meanwhile, several of the Ar 234 prototypes – including a few of the surviving six twin-engine Jumo 004-powered “trolley-and-skids” Ar 234A-series prototypes – were sent forward in the reconnaissance role. In most cases, it appears they were never even detected, cruising at about 460 mph at over 29,900 ft, with the seventh prototype achieving the first-ever wartime reconnaissance mission over the United Kingdom by a Luftwaffe-used jet aircraft.
The few 234Bs entered service in autumn and impressed their pilots. They were fairly fast and completely aerobatic. The long takeoff runs led to several accidents; a search for a solution led to improved training as well as the use of two jettisonable RATO units. The Jumo 004 engines were always the real problem; they suffered constant flameouts and required overhaul or replacement after about 10 hours of operation.
The most notable use of the Arado Ar 234 in the bomber role was the attempt to destroy the Ludendorff Bridge at Remagen. The aircraft continued to fight in a scattered fashion until Germany surrendered on 8 May 1945. Some were shot down in air combat, destroyed by flak, or “bounced” by Allied fighters during takeoff or on the landing approach, as was already happening to Messerschmitt Me 262 jet fighters. Mostly the remaining aircraft sat on the airfields awaiting fuel that never arrived.
Overall from mid-1944 until the end of the war a total of 210 aircraft were built. In February 1945, production was switched to the Arado Ar 234C variant. It was hoped that by November 1945 production would reach 500 per month. Only a few of this four engine aircraft were built before Germany finally collapsed (Ref.: 24).