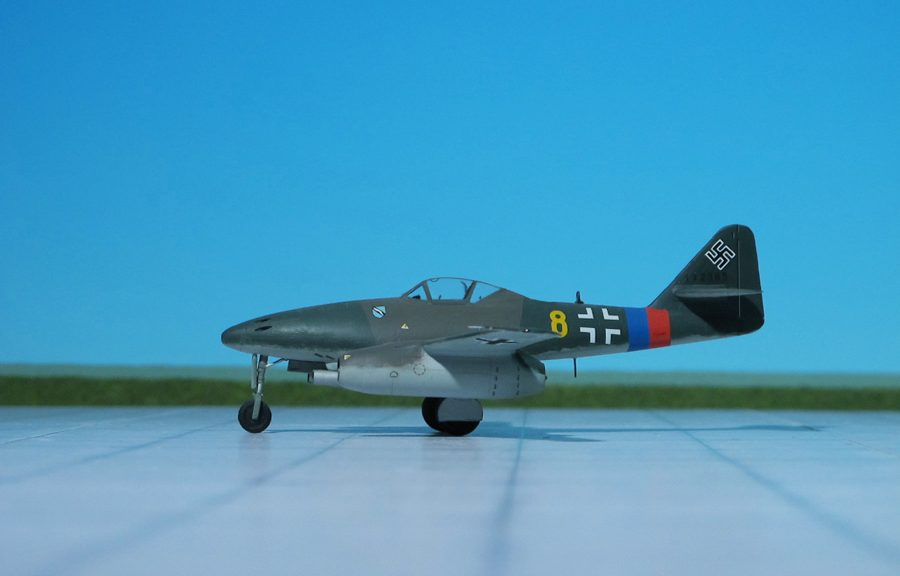 COMMENT: The Messerschmitt Me 262, nicknamed ‘Schwalbe’ (‘Swallow’) was the world’s first operational turbojet engine powered fighter aircraft. Design work started in late 1938 when deliveries the first brand new BMW and Junkers turbojet engines were expected. Immediately, Messerschmitt began design studies on a fighter project under the designation Messerschmitt Me P.1065. The RLM ordered to build a mock-up and the evaluation expected promising results. Delayed production of turbojet engines led to the installation of a Junkers Jumo 210 G piston engine into the first aircraft, now officially designated Messerschmitt Me 262 V1. In spring 1940  first BMW P.3302 turbojets were available (prototypes of the later BMW 003 jet engines) and – installed additionally to the piston engine – the first flight was made on March 1942. Because the BMW engines were not operationally at all the Me 262 V-3 was equipped with two Junkers Jumo 004 turbojet engines and made the first pure jet flight in July 1942. All flight tests were promising and production order for the new fighter was placed. One of the most advanced aviation designs in operational use during World War II, the Me 262 was used in a variety of roles, including light bomber, fighter bomber, reconnaissance, and night fighter. The Me 262 was faster, and more heavily-armed than any Allied fighter, including the first British turbojet-powered fighter Gloster ‘Meteor’. But permanent engine problems and top-level interference kept the aircraft from operational status with the Luftwaffe until mid-1944. In total about 1,400 Me 262s were produced when the WW II ended. Primary production version was the Messerschmitt Me 262A-1a, usable as both fighter and fighter-bomber. The aircraft shown here belonged to the III./JG 7 (Third Group / Fighter Squadron 7) and has two Wfr.Gr. 21 (‘Werfer-Granate’, Rocket propelled shell) on bomb racks (Ref.: 20, 24).