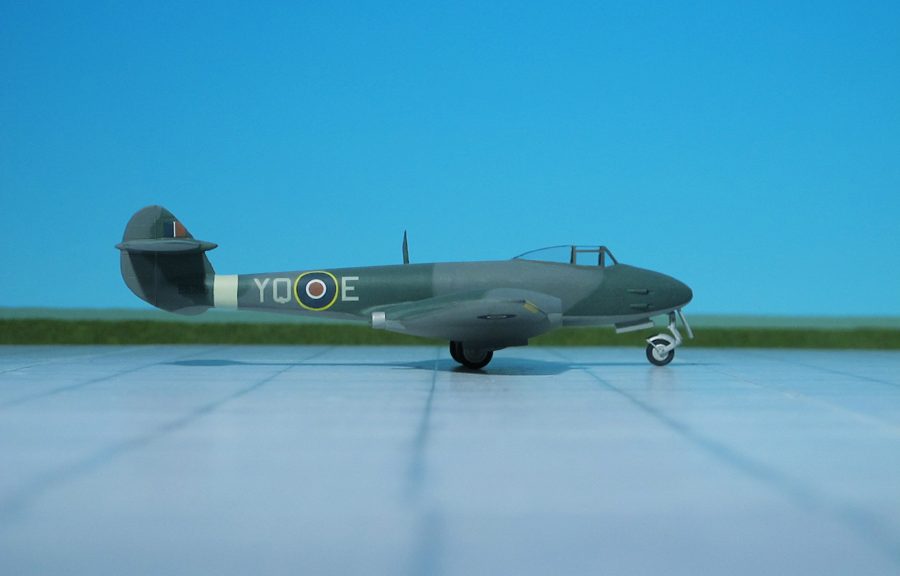 COMMENT: Early in 1940, Gloster Aircraft’s design team was entrusted with the design of a single-seat interceptor fighter to specification F9/40, the first specification ever prepared in Britain for an operational turbojet aircraft. Gloster had some experience in handling the turbojet engine as a new power unit for aircraft: The Gloster E.28/39 ‘Pioneer’ was the first jet-powered aircraft to fly in Britain.  Now, the result of the new design, the ‘Meteor’, was the first jet aircraft to enter squadron service with the RAF, and the only Allied jet aircraft to see operational service during World War II. A conventional twin-engine layout was adopted for the new fighter and on February 1941, and the Ministry of Aircraft production placed an order for twelve prototypes. In the event, only eight of the prototypes were completed, the first of these commencing taxiing trials on July 1942, powered by low thrust delivering non-flying Rover W.2B turbojets. Difficulties with the more powerful Power Jets W.2/500 resulted in the installation of RoverB.23 engines and the first flight of the ‘Meteor’ was made on July, 1943. A variety of other engines were tested in the prototypes until the first twenty ‘Meteor I’ were delivered to the RAF and on August 1944 one of these scored the first confirmed victory by a British jet fighter when a V-1 missile was destroyed by tipping it over with its wing and thus causing it to crash. And although in service at the ending stage of WW II the Gloster ‘Meteor” was never encountered in the air with the German Messerschmitt Me 262 ‘Schwalbe’ (Ref.: 12).