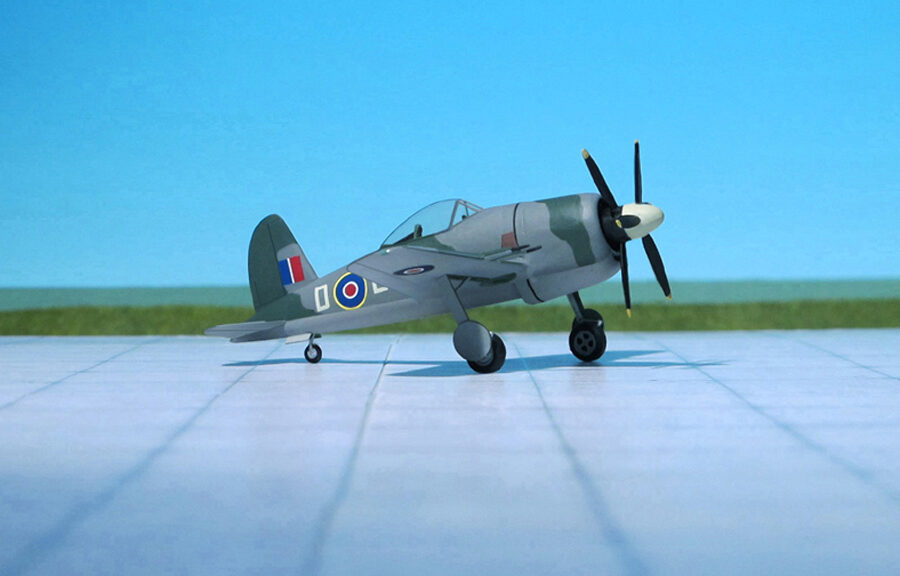 COMMENT: In the middle war years it was realized that the current fighter like the Hawker Typhoon were in many respects a bit too large to meet the current requirement for single-seat fighters. Consequently, in September 1942 Specification F.6/42 was issued for a smaller and lighter fighter, the document stating an armament of four 20mm cannon and a speed of 450 mph at 20,000 ft, and this aircraft was to be superior in climb, speed and maneuverability to any fighter that might be developed out of Germany’s superb Focke-Wulf Fw 190. Proposals were forthcoming from Airspeed, Boulton Paul, Folland, Hawker, Supermarine, Vickers and Westland and those from Folland and Hawker were favored, the latter eventually being covered by the new Specification F.2/42 and flown as Hawker Fury.
Follands Fo.117 project generated some attention, particularly its contra-rotating airscrew which was then a new feature in fighter design. The Air Staff had assumed that the reason for having this smaller diameter propeller was to provide a smaller undercarriage and a more compact gun installation, but in fact Folland had used it to raise the wing in relation to the fuselage so that the exhaust and cooling air would be ejected above and below the wing roots, thereby reducing drag. The Fo.117 design was favored by RAE Farnborough but there were doubts about the firm having the ability to develop and manufacture such an advanced aircraft quickly enough.
Follands ability to carry through the project had been thoroughly assessed and it was clear that the company could not do the job by itself, but Folland was prepared to work with another firm. By 29 December several minor changes had been made to the design which had improved the Fo.117’s performance figures and altered the all-up weight to 4,160 kg.
Nevertheless, the Chief of the Air Staff (CAS) felt that the design had some particularly good qualities, especially in its potential maneuverability. Indeed the Folland and Hawker F.6/42 projects were discussed and compared very closely during January 1943. However, in March the Folland Fo.117 was abandoned, in part because the country’s design capacity was already overloaded and there were worries about squandering precious resources by giving a job like this to a company who would probably not have the aircraft ready in a sufficiently short period of time, Folland being relatively new and inexperienced in a job of fighter design. In addition, despite the Fo.117 offering a potentially better performance, Hawker’s own project would be ready much earlier.
However, later in 1943 the project was revived as Fo.117A, the revised design introducing a laminar flow wing while the 2,500 hp Centaurus XII still had the contra-rotating propeller. Plans were laid down for production aircraft to be produced by English Electric and six prototypes were actually ordered in September 1943 to an updated specification F19/43. However, in the end they were never built and there are no further details available to describe these airplanes and compare them with the original Folland Fo.117.