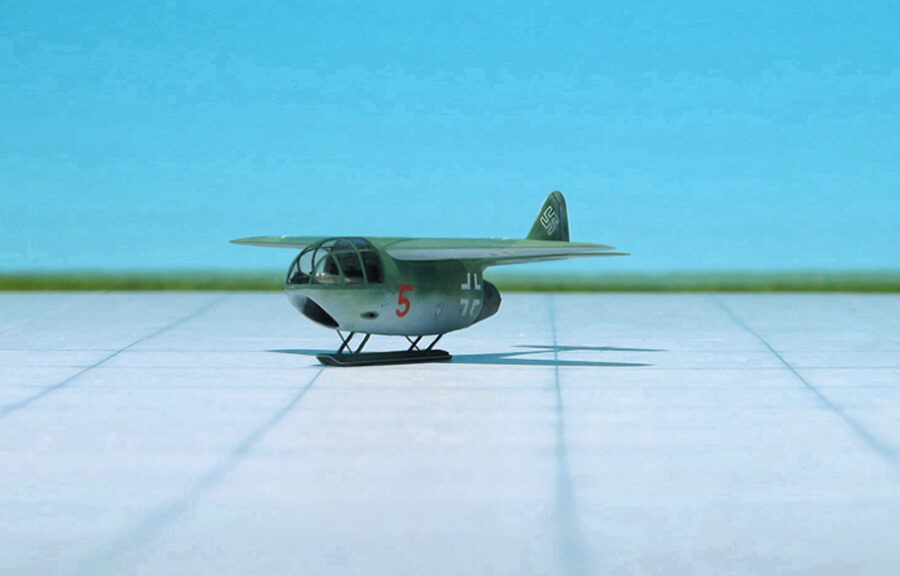 ACCOMMODATION: Only Pilot in prone position

COMMENT: During November 1944, the RLM issued a requirement for the simplest possible type of fighter which could be more rapidly produced than the Heinkel He 162 Salamander (“Volksjäger”), (People-fighter) then being built. The design was not, however, to be a semi-expendable weapon in the manner of the Bachem Ba 349 Natter, because conventional landings and take-offs were to be made. Much had already been done in the Volksjäger competition to simplify airframes, so attention now turned towards simplifying the power unit, though without losing too much in the way of performance. Thus, the power unit was to be a simple pulse-jet as produced by Argus for the Fieseler Fi 103 V 1) flying bomb, a turbojet engine  or a liquid-fuelled rocket. The Kleinstjäger or Miniaturjäger was to employ the minimum of strategic materials, dispense with refinements such and electronic equipment and, by virtue of quick production, increase the chances of intercepting the enemy by flying in large numbers.
The problem of supplying all the new pilots was common to both Miniatur- and Volksjäger programmes whichever was adopted. Only three firms, which also participated in the Volksjäger competition, put forward Miniaturjäger projects, Blohm und Voss, Heinkel and Junkers.
There is also some evidence that the Dornier Company was working on a design for a Miniaturjäger. In literature a three-view thumbnail sketch of a design is known, the in-house project designation is given as Do P…. The little aircraft was to be powered by a BMW 003 turbojet engine. A high-mounted wing with light swept leading edge was envisaged, the air intake was located in the nose with the pilots seat in prone position above it. The turbojet engine was located at the fuselages end, the conventional tail plane was mounted on a boom protruding from the fuselages end. For take-off probably a trolley was used, the landing was provided by means of a retractable skid. No further facts or details are reported. (Ref.: 22 and