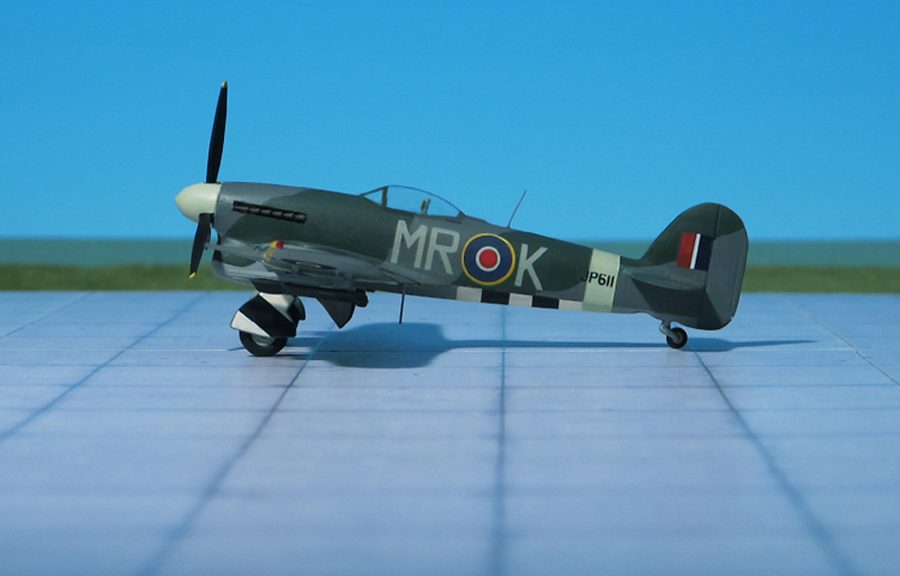 COMMENT: The Hawker “Typhoon” (“Tiffy” in RAF slang), was a British single-seat fighter bomber, produced by Hawker Aircraft. It was intended to be a medium–high altitude interceptor, as a replacement for the Hawker “Hurricane” but several design problems were encountered and it never completely satisfied this requirement.
The “Typhoon” was originally designed to mount twelve Browning Machine guns and be powered by the latest 2000 hp engines. Its service introduction in mid-1941 was plagued with problems and for several months the aircraft faced a doubtful future. When the Luftwaffe brought the formidable Focke-Wulf Fw 190 into service in 1941, the “Typhoon” was the only RAF fighter capable of catching it at low altitudes; as a result it secured a new role as a low-altitude interceptor.
By contemporary standards, the new design’s wing was very “thick”, similar to the “Hurricane” before it. Although the “Typhoon” was expected to achieve over 400 mph in level flight at 20,000 ft, the thick wings created a large drag rise and prevented higher speeds than the 410 mph at 20,000 feet achieved in tests. The climb rate and performance above that level was also considered disappointing. When the “Typhoon” was dived at speeds of over 500 mph, the drag rise caused buffeting and trim changes. These compressibility problems led to Hawker designing the “Typhoon II”, later known as the “Tempest”, which used much thinner wings with a laminar flow airfoil.
By 1943, the RAF needed a ground-attack fighter more than a “pure” fighter and the “Typhoon” was suited to the role and less-suited to the pure fighter role than competing aircraft such as the Supermarine “Spitfire” Mk IX. The powerful engine allowed the aircraft to carry a load of up to two 454 kg bombs, equal to the light bombers of only a few years earlier. The bomb-equipped aircraft were nicknamed “Bombphoons” and entered service with No. 181 Squadron, formed in September 1942
Starting in January 1943, a “Typhoon” was used to test a new, clear, one piece sliding “bubble” canopy and its associated new windscreen structure which had slimmer frames which, together with the “cut-down” rear dorsal fairing, provided a far superior all-around field of view to the car-door type. From November 1943 all production aircraft were to be so fitted. However, the complex modifications required to the fuselage and a long lead time for new components to reach the production line meant that it took some time before the new canopy became standard. Production of the “Typhoon”, which was entirely the responsibility of Gloster Aircraft, totaled 3,330 machines (Ref.: 24)