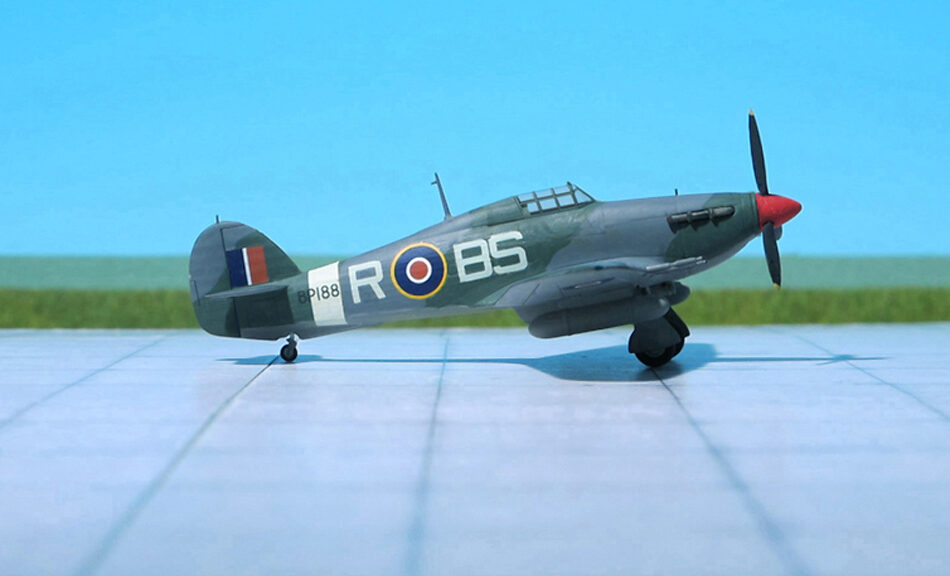 COMMENT: The Hawker Hurricane was a British single-seat fighter aircraft of the 1930s–40s that was designed and predominantly built by Hawker Aircraft Ltd. for service with the Royal Air Force (RAF). It was overshadowed in the public consciousness by the Supermarine Spitfire’s role during the Battle of Britain in 1940, but the Hurricane inflicted 60 percent of the losses sustained by the German Luftwaffe in the engagement, and fought in all the major theatres of the Second World War. The Hurricane was developed through several versions, into bomber-interceptors, fighter-bombers, and ground support aircraft as well as fighters. Versions designed for the Royal Navy known as the Sea Hurricane had modifications enabling operation from ships. Some were converted as catapult-launched convoy escorts. By the end of production in July 1944, most oft he 14,487 Hurricanes had been completed in Britain and Canada.
In June 1936, the Hurricane was formally ordered into production, the Air Ministry having placed its first order that month for 600 aircraft. On 26 June 1936, the type name “Hurricane”, which had been proposed by Hawker, was approved by the Air Ministry
A key reason for the aircraft’s appeal was its relatively simple construction and ease of manufacture. In comparison to the Supermarine Spitfire, it was significantly cheaper and involved less labour, requiring 10,300 man hours to produce versus 15,200 for the Spitfire. As a large-scale war was looking increasingly likely, and time was of the essence in providing the RAF with an effective fighter aircraft, it was unclear if the more advanced Spitfire would enter production smoothly, while the Hurricane made use of well-understood manufacturing techniques.
On 12 October 1937, the maiden flight took place of the first production Hurricane I, which was powered by a Merlin II engine. Production deliveries had been delayed by roughly six months due to a decision to equip the Hurricane only with the improved Merlin II engine, while the earlier Merlin I had been prioritised for the Fairey Battle and the Hawker Henley. By the following December, the first four aircraft to enter service with the.RAF. By February 1938, No. 111 Squadron had received 16 Hurricanes. Upon the outbreak of the Second World War, over 550 Hurricanes had been produced, which had equipped a total of 18 squadrons, while a further 3,500 aircraft were on order.
The Hawker Hurricane was a low-wing cantilever monoplane outfitted with retractable undercarriage and an enclosed cockpit for the pilot. A clean, single-seat fighter, it was developed to provide a competent combatant for aerial combat against the latest fighter designs that were emerging amongst the air services of other powers of the era. The Hurricane was typically equipped for flying under both day and night conditions, being provided with navigation lights, landing lights, complete blind-flying equipment, and two-way radios.
The design of the Hurricane’s construction was already considered to be somewhat outdated when introduced to service and resembled those used on the earlier biplanes. Hawker had decided to employ its traditional construction techniques instead of radical measures such as the adoption of a stressed-skin metal exterior.  An all-metal, stressed-skin wing of duraluminium was introduced in April 1939 and was used for all of the later marks. “The metal skinned wings allowed a diving speed that was 80 mph higher than the fabric-covered ones. The great advantage of the metal-covered wings over the fabric ones was that the metal ones could carry far greater stress loads without needing so much structure beneath
First production version was the Hurricane Mk I, with fabric-covered wings, a wooden two-bladed, fixed-pitch propeller or three bladed variable pitch propeller.
The Hurricane Mk I (revised) had constant speed metal, metal-covered wings, armour and other improvements. A total of 4,200 Mk I were built by Hawker, Gloster Aircraft Company and Canadian Car and Foundry.
Next, the Hurricane Mk IIB (Hurricane IIA Series 2) were fitted with racks allowing them to carry two 110 kg or two 230 kg bombs. This lowered the top speed of the Hurricane to 301 mph, but by this point mixed sweeps of Hurricanes carrying bombs, protected by a screen of fighter Hurricanes were not uncommon.
Hurricane Mk IIA Series 1 was equipped with a new and slightly longer propeller, spinner, and 4 additional wing-mounted .303 in (7.7 mm) Browning machine guns; for a total of 12 guns. The first aircraft were built in February 1941 and were renamed Mark IIB in April 1941. A total of 3,050 IIB built until November 1942.
The Hurricane Mk IIC (Hurricane Mk IIA Series 2) was equipped with new and slightly longer propeller and spinner, and fully replaced the machine-gun armament with four 20 mm Hispano Mk II cannons and a slightly modified wing. The new wings also included a hardpoint for a 500 or 110 kg bomb and, later in 1941, for fuel tanks. By then performance was inferior to the latest German fighters, and the Hurricane changed to the ground-attack role, sometimes referred to as the Hurribomber. There were 4,711 Hurricane Mk IIC built by Hawker between February 1941 and July 1944.
Later important versions were the Hurricane Mk IID and Hurricane Mk IV. Overall, some 14,487 Hurricanes and Sea Hurricanes were produced from 1937 to 1944 in England and Canada. This excellent and versatile aircraft was the basis for the development of its successor, the Hawker Typhoon (Ref.: 24)