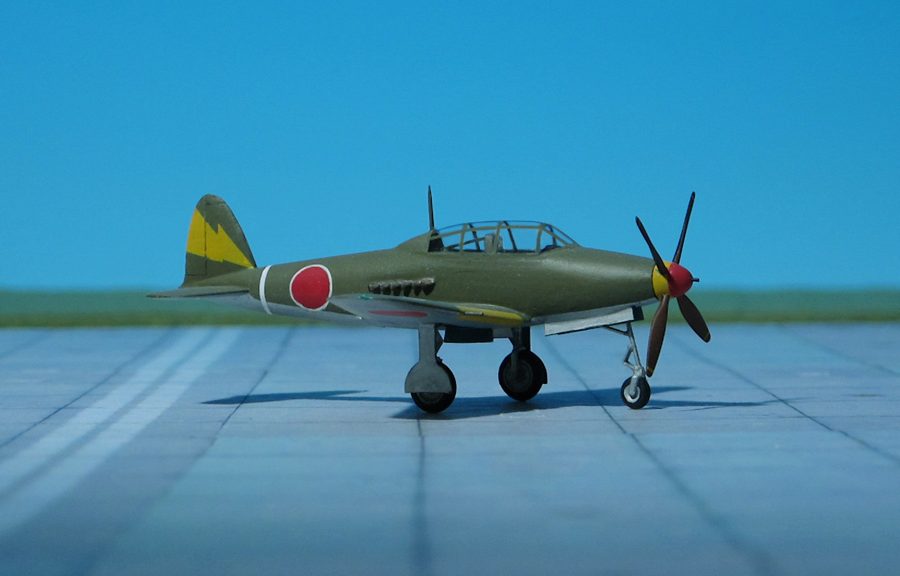 COMMENT: In the summer of 1941, Rikugun Kokugijutsu Kenkyujo (Japanese Army Aerotechnical Research Institute, short named “Kogiken”) formed a design group under the leadership of Ando Sheigo. The task was to study Japanese aviation technology in terms of what was possible at present and in the near future. Additionally, some effort was to be spent on reviewing the aircraft technology of other countries. From the results the group was to assemble and draft proposals for aircraft to fill various pre-determined roles: heavy fighter, light bomber, heavy bomber and reconnaissance. For a bigger idea pool, Imperial Japanese Army (IJA) main aircraft providers, Kawasaki and Tachikawa, were invited to join the group, too. In that period projects such as Kogiken Plan III Revised light bomber and Kogiken Plan V Revised light bomber were designed and proposed to the IJA.
Among fighter designs the Kogiken Plan I Type A was a single seat heavy fighter and a Japanese adaption of the Bell P-39 “Airacobra” mid-fuselage engine concept. The aircraft was designed end 1941 and should be powered by a single Kawasaki Ha 40 liquid-cooled in-line engine, derived from the German Daimler-Benz DB 601A. The engine was installed immediately aft the cockpit driving a four-bladed puller propeller via an extension shaft. A tricycle landing gear was provided similar to the Bell P-39. Armament consisted of 37 mm Ho-203 or 20 mm Ho-5 canon firing through the propeller hub and two wing-mounted 12.5 mm Ho-103 guns. No further details are known, the project never left the drawing board (Ref.: Parts from Unicraft).