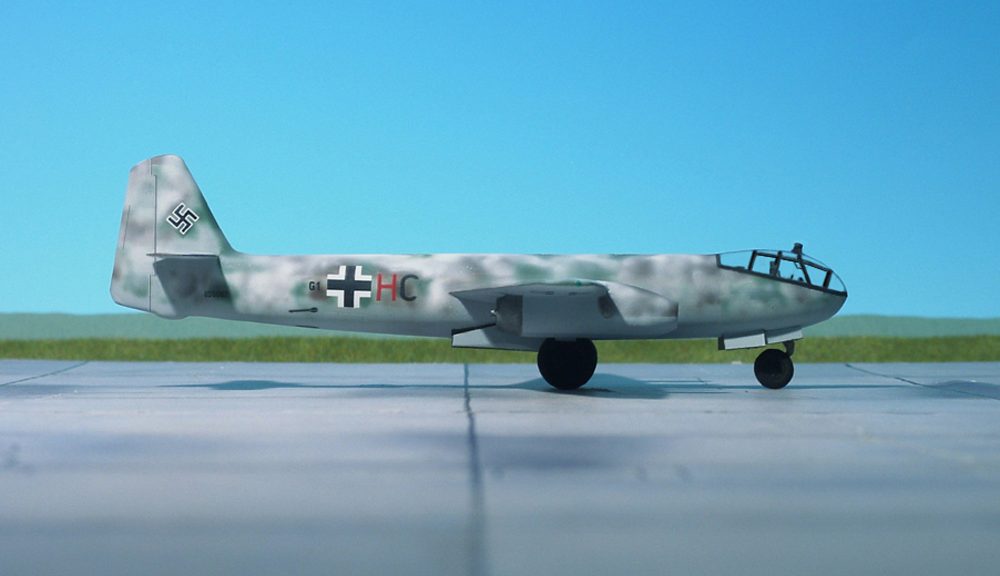 COMMENT: The Heinkel He 343 was a four-engine jet bomber project by Heinkel Aircraft Company in the last years of WW II. In 1944 a total of 20 of these aircraft were ordered. For shortening the development time and for re-use of existing parts, its general design was envisioned along the lines of an enlarged Arado Ar 234 “Blitz” (“Lightning”). For a choice of engines, the Junkers Jumo 004 and the Heinkel HeS 011 were planned. The DFS (Deutsche Forschungsinstitut für Segelflug), (German Research Institute for Gliding Flight) was involved in the project and created the project known as P.1068. By the end of 1944, work was nearly finished by the Heinkel engineers, with parts for the He 343 prototype aircraft either under construction or in a finished state, when the order was cancelled due to the “Jägernotprogramm (Emergency Fighter Program). Four versions were planned: the He 343A-1 bomber, the He 343A-2 reconnaissance aircraft, and the He 343A-3 and He 343B-1 “Zerstörer” (“Destroyer”) heavy fighters.
The Heinkel He 343A-1 was to be the bomber version. Depending on the engines used, the bomb load ranged between 2000 kg to 3000 kg, with 2000 kg to be carried internally, and 1000 kg to be carried externally. Trials were to be held with the Fritz X radio controlled bomb, which would have also added a third crew member. Defensive armament consisted of two fixed rear firing MG 151 20 mm cannon with 200 rounds each, which were mounted in the rear fuselage. None aircraft was completed. However, after WW II the Soviet Union utilized the design as the basis for the development of the Ilyushin Il-22, changing some of the parameters such as size and crew numbers. One prototype was built and flown. The results of the tests were used in development of the Ilyushin Il-28 (Ref: 24).