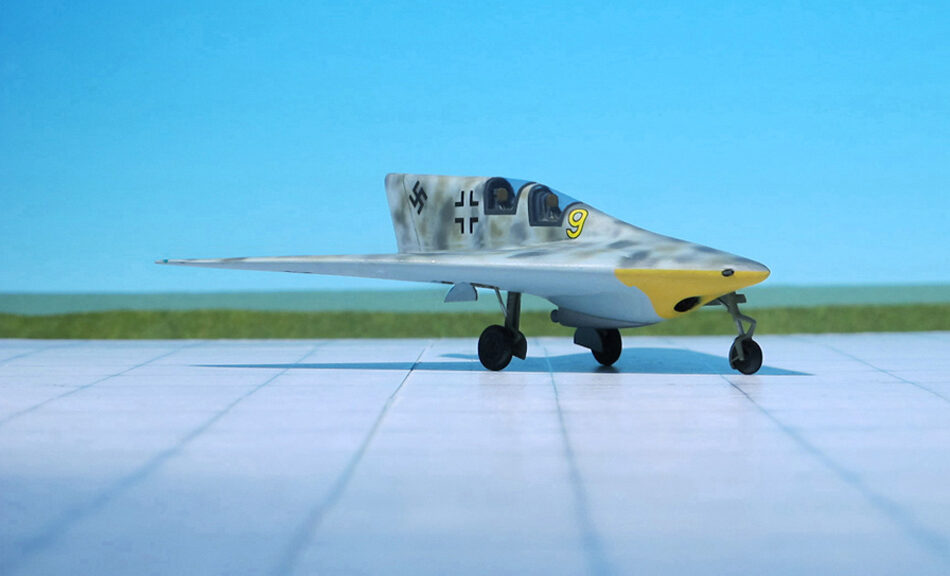 COMMENT: By 1943, the Hortens were discussing the possibility of supersonic flight. While this remained unchartered territory, the decided to experiment with a highly swept glider that would provide an understanding of slow speed handling with a highly swept configuration that might be capable of reaching or exceeding Mach 1.
The glider was designed as Horten Ho XIIIa and construction is believed to have begun in early 1944. The aircraft used wings from the Horten Ho III attached to a new central section which provided a span of 40 ft and a sweep of 60 degrees. The design was very clean with few protrusions apart from a dorsal spoiler and there were no vertical control surfaces. The pilot was housed in a gondola arrangement, mounted below the center section, with access via a tail cone cover. In an emergency, the pilot would jettison his cover and slide out the back of the unit.
The first test flight took place at Göttingen Airfield on 27 November 1944 and further 19 flights were conducted at Homberg by test pilot Hermann Strebel who reported that the glider handled well although he complained about poor roll control, limited forward visibility and landing problems caused by the extended skid.
Nevertheless, the Hortens were contemplating the construction of a more advanced prototype that would be powered by an Argus As10 piston engine in a pusher configuration. But this never came about ans at the end of the war a group of Russian soldiers who had just been liberated from a prison camp discovered the Ho XIIIa and destroyed it.  Furthermore, all the plans and research material for this project vanished without a trace. It now appears that the Ho XIIIb was the anticipated final development of this program and it was expected to have a supersonic performance under certain conditions. Looking very much like an advanced Lippisch design, this fighter would have been about the same size as the HoXIIIa with the same 60 degrees wing sweep. But unlike the glider there would have been a substantial upright fin containing the cockpit in very similar fashion to the proposed supersonic Lippisch P. 13a.
This similarity has often been remarked on although Reimar Horten denied any knowledge of Lippisch’s work during this time in post-war London. However, this seems highly unlikely and there was almost certainly wartime contact between the Hortens and Lippisch. The supersonic Ho XIIIb would have been powered by mixed propulsion system. This could have been either a BMW 003R combined turbojet linked to a BMW 718 rocket engine or a Heinkel/Hirth HeS 011 turbojet and a supplementary Walter rocket engine.
Presumably, a two seater version of the supersonic Horten Ho XIIIb was on the drawing board when in 1945 the “Third Reich” collapsed.