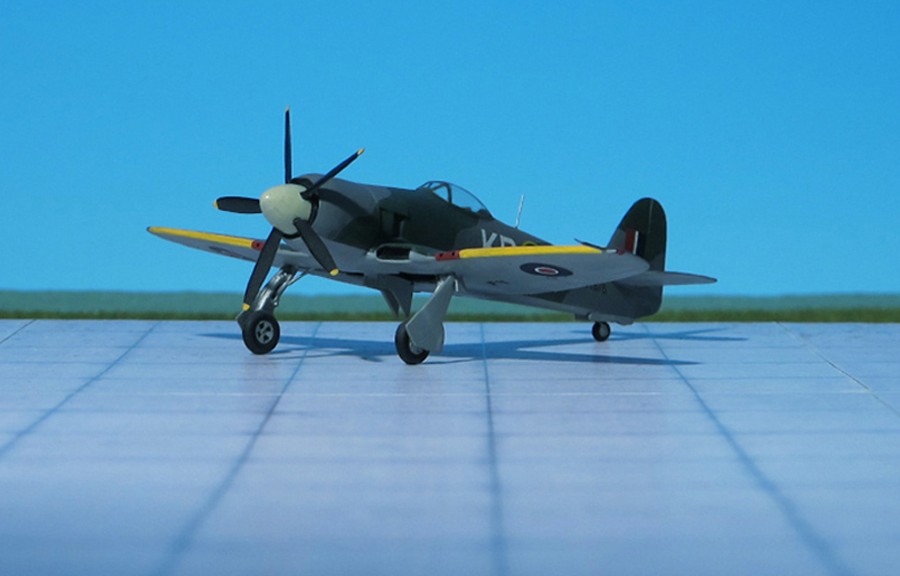 COMMENT: The fortuitous presentation of a Focke-Wulf Fw 190A-3 to the RAF in 1942 had profound influence on fighter-design thinking in the U.K. The authorities were surprised by the maneuverability, speed, and handling characteristics of this light-weight fighter. Thus, specification F.6/42 was released and Hawker Aviation offered a design called “Tempest Light Fighter (Centaurus)”. Earlier in 1941 the Hawker design team already had several projects as follower of the Hawker “Tempest”, a Sabre IV-powered P.1018, the Griffon 61-powered P 1019, and the Centaurus IV-powered P.1020. But all these remained in a project status. Early 1943 it was decided to combine the new specification F.2/43 for a land-based fighter and N.7/43 for a naval interceptor. Thus the responsibility for the development and construction of the land-based fighter (“Fury”) was taken by Hawker and Boulton-Paul accepting the task of adapting the aircraft for shipboard operations (“Sea Fury”). By December 1943 six prototypes had been ordered, two of these being powered by the Griffon, two by the Centaurus XXII, one by the Centaurus XII, the remaining prototype being a test structure. In April 1944 orders were placed for 200 F2/43 fighters for the R.A.F. and 200 fighters for the Royal Navy. The first flight of the Centaurus-powered prototype flew on September 1944, the second on November that year with the Griffon 85 engine, driving three-blade contra-rotating propellers. However, the third Fury prototype flew on July 1945 with the Centaurus XV engine. With the termination of the hostilities, the R.A.F. by now committed to a jet programme, cancelled all production contracts except a small number of “Sea Fury’s” for other foreign Allied Air Forces. (Ref.: 12).