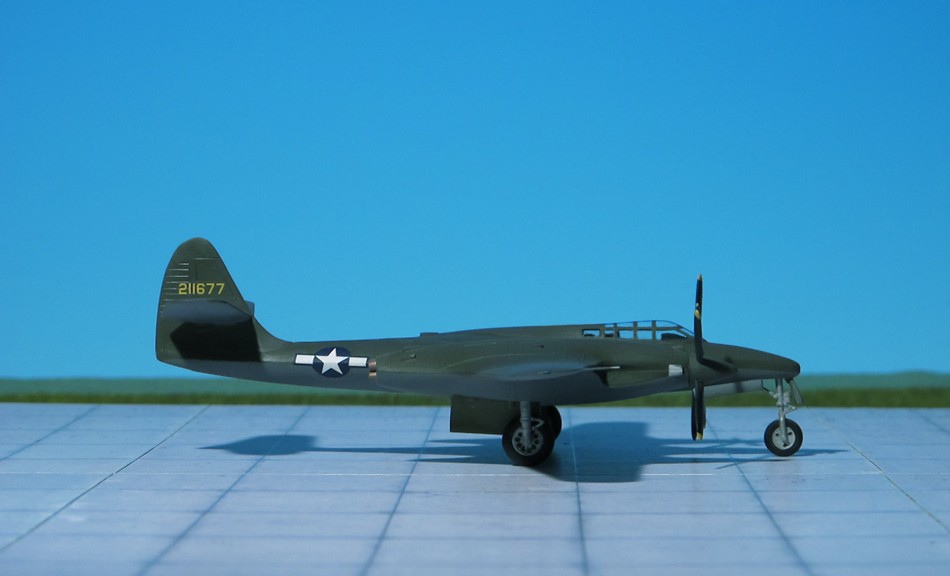 COMMENT: In 1939 the McDonnnell Aircraft Corporation submitted the Army Air Corps proposals for a long-range fighter with an unconventional design. The engine, an Allison V-3420-B2 or Pratt and Whitney H-3130, both with two-stage superchargers, was buried in the fuselage aft of the pilot, and driving two pusher airscrews aft of the wings by means of an extension shaft and right-angle gear drives. After further changes in the design studies in 1941 the project received the designation XP-67, and two prototypes were ordered. McDonnell design team attempted to maintain true aerofoil sections throughout the entire fighter, the centre fuselage and the rear portions of the engine nacelles merging to give the aircraft a unique appearance. Power was provided by two Continental XI-1430-1 engines fitted with General ElectricD-2 turbo-superchargers driving four-blade airscrews and using the exhaust to augment thrust. By December 1943 the first XP-67 was completed and ground trials began immediately. The aircraft eventually flew the first time on January 6, 1944, but after a few minutes the flight was terminated in an emergency landing due to difficulties with the experimental engines. Flight trials continued throughout the summer 1944 resulting in several changes in the design and on September 1944 the XP-67 was irreparably damaged by fire resulting in the termination of the development contract (Ref.: 13).