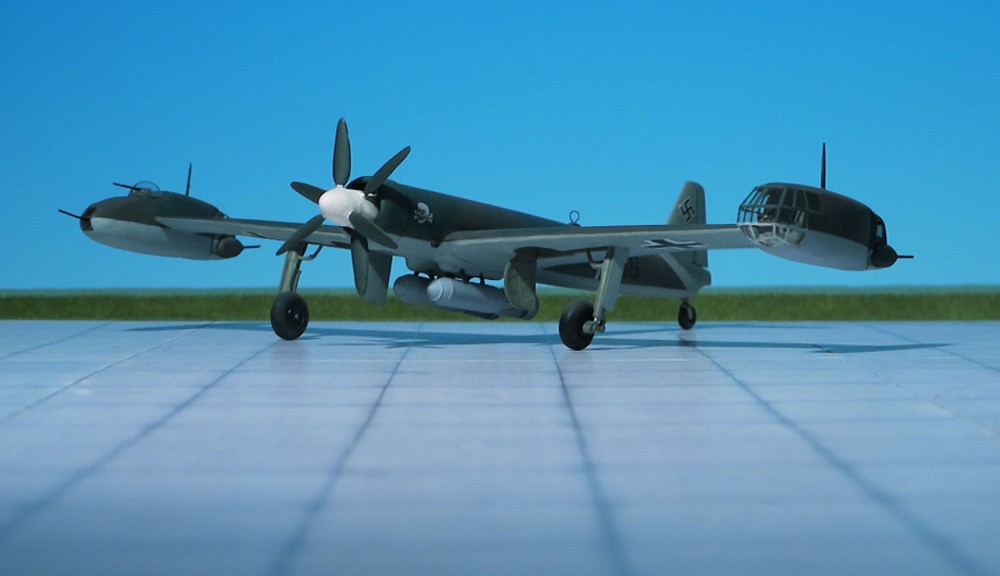 POWER PLANT: One BMW 803, a combination of two BMW 801 radial engines, coupled back to back, rated at 3,847 hp, driving three-bladed contra-rotating propellers

COMMENT: This very unorthodox Blohm & Voss design of a single-engine heavy attack bomber dates back to 1942. Basic concept was the construction of a heavy aircraft around the most powerful engines available in Germany at that time. Two versions were proposed to the RLM differing primarily in the power units.  While the Bv P. 163.01 was powered by a Daimler-Benz DB 613C liquid-cooled engine, a side-by-side arrangement of two DB 603G engines, rated together at 3,800 hp, the Bv P. 163.02 was to be powered by a BMW 803 engine, a back-to-back combination of two BMW 801 radial engines, rated at 3,850 hp. All engines drove three-blades, contra-rotating propellers. Very unusual were the location of the cockpits for crew-members. The pilot and navigator/radio operator sat in a nacelle located at the extreme end of port wing, with a rear gunner in a turret with two twin mounted MG 151 15mm machine guns to the rear. Another nacelle was located on the starboard wingtip and was manned by two gunners, one firing a machine gun forward from the front and a second from turret on the top of the nacelle, the other gunner sat in a turret at the rear, also with two machine guns. The bomb-bay was located mid-fuselage, over-load bombs could be carried under wing-root mounted racks. In order to test this unusual arrangement an asymmetrical Blohm & Voss Bv 141 was equipped with a second cockpit installed on the wingtip, the controls coupled with those in the main cockpit. The results showed that this arrangement warranted no advantage and the projects were cancelled (Ref.: 17).