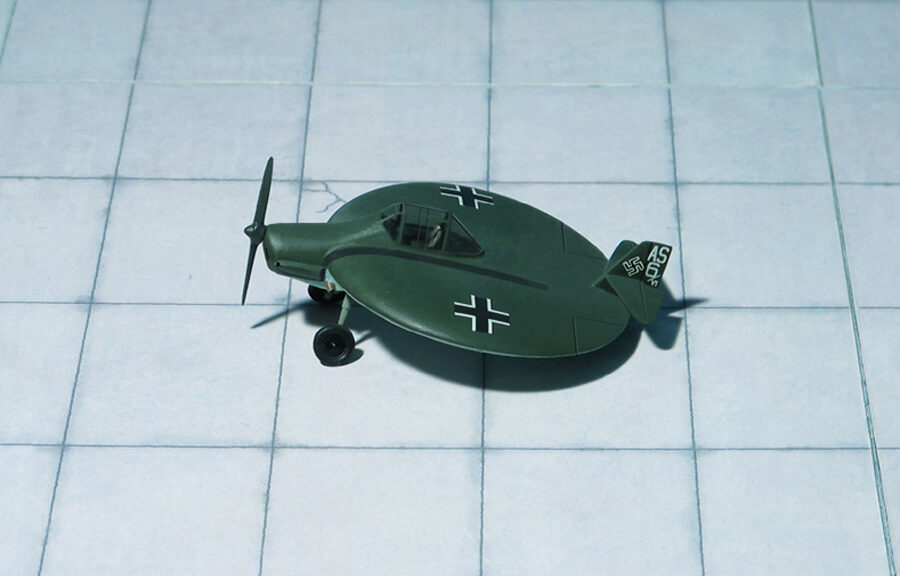 COMMENT: The Sack AS-6 was a German prototype circular-winged aircraft built privately during the Second World War. It did not see production.
The aircraft was designed by Arthur Sack, a farm owner and amateur engineer from a little town near Leipzig. In his attempts to create a circular-winged aircraft he built five model aircraft, each with little success. He entered his fifth model, with a 1.25 meter diameter wing and 1.5 horsepower engine, in a 1939 competition for remotely controlled models with combustion engines. The models were to take off and land at the same point. None of the entries managed to do so. Sack’s model was unable to take off from the ground but flew when released by hand.
At the end of 1940 Sack started design of the AS-6, a full-sized, manned aircraft and successor to the earlier models. Its wing diameter was four times larger than the last model. He built it privately in a shed at his farm, using a wood construction. The Argus As 10 engine as well as the main landing gear from a Messerschmitt Me 109 was sponsored by ATG, a company at Leipzig, that assembled Junkers bomber aircraft. In 1944 the AS-6 prototype was finished and its design documents provisionally approved. Arthur Sack enlisted the help of the chief test pilot of ATG to test the aircraft. Approximately a dozen tests revealed multiple failings, especially in the undercarriage, and managed little more than a hop off the ground. The tests continued at an airbase in Brandis by a pilot in a Messerschmitt Me 163B unit based there. As the AS-6 did not appear on an inventory of seized items when US forces captured the airbase it is assumed that the plane was destroyed to prevent capture (Ref.: 24).

It is to note that the US Navy also planned to realize a disc-shaped Short Take-off/Landing (STOL) aircraft. In the late 1930s the Vought Company was working on an experimental twin engine, circular winged aircraft, the  V-173 Flying Pancake. After successful and promising flights the US Navy placed an order for two prototypes of a new carrier-based fighter aircraft, larger, heavier and more powerful than the V-177. Two prototypes oft he Chance Vought XF5U-1 Flying Flapjack were built made only ground runs and never lifted into the air. Due tot he end of WW II and with jet aircraft coming into service, the Navy finally canceled the project in 1947. Possibly a turbojet powered variant, the Vought Jet skimmer, was on the drawing board. Exact data are not available.