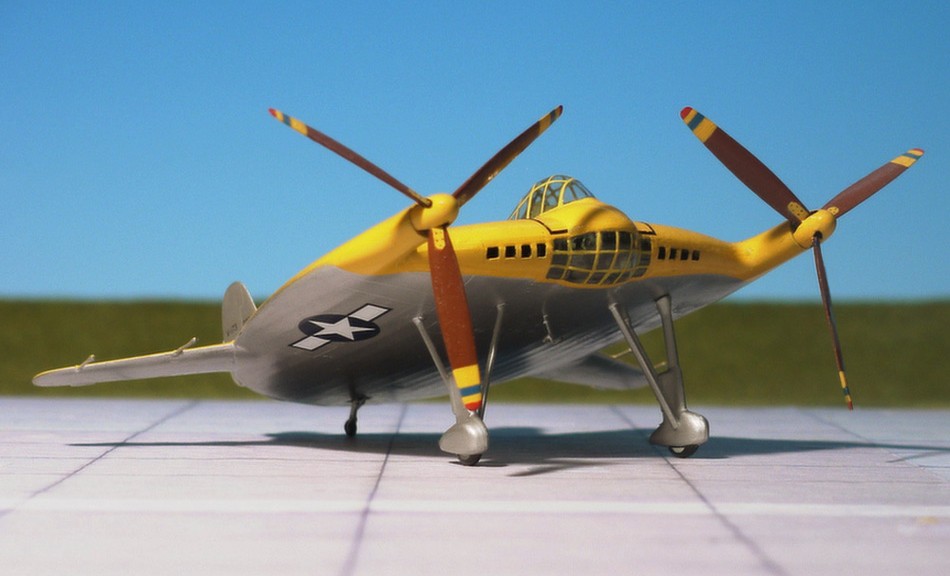 COMMENT: The Vought V-173 Flying Pancake was an American experimental test aircraft built as part of the Vought XF5U program during World War II.
Both the V-173 and the XF5U featured an unorthodox “all-wing” design consisting of flat, somewhat disk-shaped bodies (hence the name) serving as the lifting surface. Two piston engines buried in the body drove propellers located on the leading edge at the wingtips.
In the 1930s, Charles H. Zimmerman was a noted aeronautical engineer who advocated the concept of “discoidal” aircraft, the so-called “Zimmer Skimmer” and worked on a variety of projects on his own and with the Vought company. After testing using scale models, including a remotely controlled, electrically powered large-scale model, designated the Vought V-162, the US Navy approached Zimmerman and offered to fund further development. Data and concept documentation was given to the Navy in 1939, with wind tunnel tests on full-scale models being completed in 1940-1941.
The original prototype, designated the V-173 (Flying Pancake), was built of wood and canvas and featured a conventional, fully symmetrical aerofoil section (NACA 0015). Designed as a “proof-of-concept” prototype, the initial configuration V-173 was built as a lightweight test model powered by two 80 hp Continental A-80 engines turning Vought F4U Corsair propellers. These were replaced by a pair of specially modified 16 ft 6 in three-bladed units. A tall, fixed main undercarriage combined with a small tailwheel gave the aircraft a 22° “nose-high” angle.
The disc wing design featured a low aspect ratio that overcame the built-in disadvantages of induced drag created at the wingtips with the large propellers actively canceling the drag-causing tip vortices. The propellers were arranged to rotate in the opposite direction to the tip vortices, allowing the aircraft to fly with a much smaller wing area. The small wing provided high maneuverability with greater structural strength. The empennage consisted of two vertical fins with rudders, all-moving stabilizers with anti-servo tabs and two large elevator/trim surfaces on either side of centerline on the trailing edge of the wing planform.
Zimmerman chose to include the all-moving stabilizer design because he realized that the increased drag, prop wash, and large wing area would make the aircraft difficult to control at low speeds. Wind tunnel tests would prove that this was a success to an extent. The aircraft would prove to require a lot of force to control at low speeds during in-flight testing but the tail design would prove to make the aircraft controllable.
The first flight of the V-173 was on 23 November 1942 with Vought Chief Test Pilot B. Guyton at the controls. The aircraft’s most significant problem concerned its complicated gearbox that routed power from the engines to its two long propeller shafts. The gearbox produced unacceptable amounts of vibration in ground testing, delaying the aircraft’s first test flight for months. This contributed to the aircraft feeling much too heavy when maneuvering for its light weight. In addition to this on the first few flights, the pilot was never able to achieve enough speed to achieve the correct amount of airflow over the control surfaces to pull the aircraft into level flight. The test pilot discussed these issues with Zimmerman and they worked to eliminate these issues. In addition to this Guyton commented that the cockpit design was poor. He explained that in addition to the poor comfort the pilot had limited to no use for the clear bottom panels of the cockpit. He explained that the pilot sat too high in the cockpit to effectively use these lower panels for takeoff or landing. Flight testing of the V-173 went on through 1942 and 1943 with 190 flights, resulting in reports of UFOs (Unidentified Flying Objects) from surprised Connecticut locals. Charles Lindberg piloted the V-173 during this time and found it surprisingly easy to handle and exhibiting impressive low-speed capabilities. Both Lindbergh and Guyton found that they were almost unable to stall the aircraft. Guyton was able to keep the aircraft in flight no matter how hard he pulled the stick in low-speed flight ranges at any altitude under 20,000 ft. On one occasion, the V-173 was forced to make an emergency landing on a beach. As the pilot made his final approach, he noticed two bathers directly in his path. The pilot locked the aircraft’s brakes on landing, causing the aircraft to flip over onto its back. Remarkably, the airframe proved so strong that neither the plane nor the pilot sustained any significant damage. Despite their inability to stall the aircraft they did find low speed handling to be a persistent issue largely due to the shape of the lifting body. They found that the aircraft acted as an airbrake when it was pulled into a high angle of attack. This meant that the control surfaces, the horizontal stabilizers, in particular, would become very hard to operate at low speeds such as stalls, takeoff, and landing.
The developmental V-173 made its last flight 31 March 1947. In 131.8 hours of flying over 190 flights, Zimmerman’s theory of a near-vertical takeoff- and landing-capable fighter had been proven. This project would be improved upon including the addition of potential armament with the prototype of the carier-borne Vought XF5U  fighter aircraft. This project would improve on many of the weaknesses discovered during the testing of the V-173 prototype (Ref.: 24).