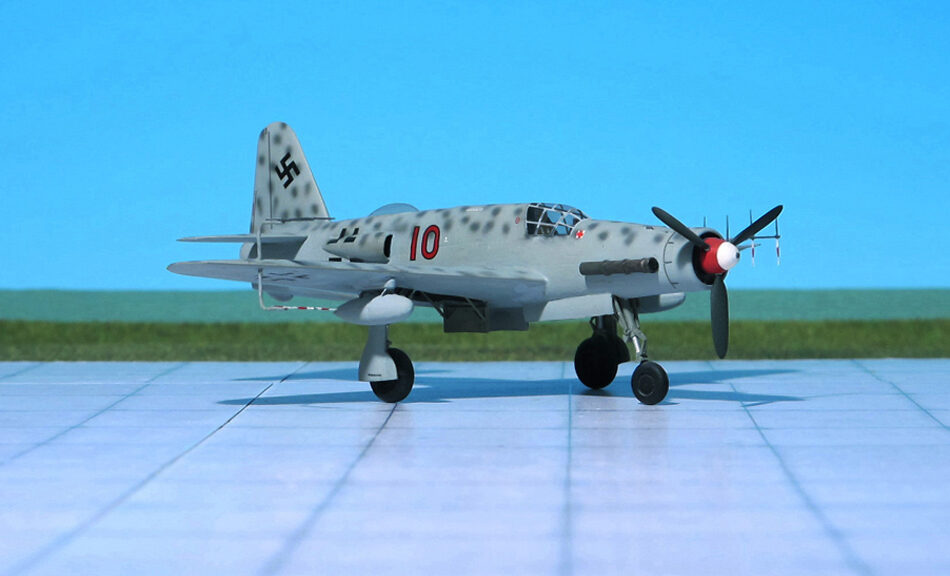 COMMENT: The Dornier Do 435 was a heavy all-weather fighter  projected by the Dornier aircraft manufacturer for the German Luftwaffe during World War II. The design based on the twin-engine Do 335 „Pfeil“ (Arrow) heavy fighter, Luftwaffe‘s fastest piston-engined aircraft of World War II.
In May 1942, Dornier submitted a design Do P.231/1 for a twin-engine single-seat „Schnellbomber“-like high-speed bomber/intruder with a 1,000 kg bombload. The performance of this project was predicted to be better than other twin-engine designs due to its unique push-pull configuration and the lower aerodynamic drag of the in-line alignment of the two engines.The proposed front engine was a Daimler-Benz DB 605E and drove a puller-type propeller while the second DB 605E was located in the rear part of the fuselage and drove a pusher-propeller.
This project was selected as the winner after beating rival designs from Arado, Junkers, and Blohm & Voss. A development contract was awarded, by the RLM issuing the Dornier firm the airframe approval number 8-335, for what after many manfications would become known as the Dornier Do 335 „Pfeil“ (Arrow). In autumn 1942, Dornier was told that the Schnellbomber Do 335 was no longer required, and instead a multi-role fighter based on the same general layout would be accepted. This delayed the prototype delivery as it was modified for the new role.
The first prototype Do 335 V1 flew on 26 October 1943. However, several problems during the initial flight of the Do 335 would continue to plague the aircraft through most of its short history. On May 1944, the RLM ordered maximum priority to be given to Do 335 production. The first preproduction Do 335 (A-0s) were delivered in July 1944. But only approximately 22 preproduction aircraft were thought to have been completed and flown before the end of the war.
Early in 1943, while the first prototype of the Dornier Do 335 was under construction the Dornier design team dicussed the possibility to increase the performance of this new heavy twin-engine fighter. With the availability of the brand new incomming  turbojet engines the original Dornier project Do P. 231/1 was redesigned and had the company’s internal designation Do P.231/3.  The design was a single seat fighter aircraft with conventional empennage. The nose-mounted Daimler-Benz DB 603 piston engine remained unchanged while the rear DB 603 engine was replaced by a non specified turbojet engine. The piston engine would be used for normal flight and cruising and the turbojet added for high-speed flight.
On May 1943 Dornier submitted a further development, the single-seat  Do P.323/2. The DB 603 was replaced by a 1,874 hp DB 603G and a tail-mounted Junkers Jumo 004 delivering app. 900 kp thrust was provided. The two air intakes for the turbojet were lokated at both sides of the mid fuselage. The air-flow duct was later positioned on the rear back of the fuselage (project Do P.232/3). While the development made progress the RLM decided to convert the design to a night-/bad weather fighter. The air-ducts were relocated to the fuselage sides and a navigator/radar-operator was seated in between on the upper surface in a glass-covered cockpit. A FuG 220 “Lichtenstein SN-2” radar with “Hirschgeweih” (Stag’s Antlers) aerial array was provided. The airframe was designated Dornier Do 435 and was in summer 1944 in an advanced project stage. For modification as prototype the Dornier Do 335 V4 was envisaged. But in autumn 1944 the RLM decided to stop all further work on the project. Nevertheless, Allied intelligence reports from early May 1945 mention spotting a Do 435 at the Dornier factory airfield at Löwenthal (Ref.: 24).